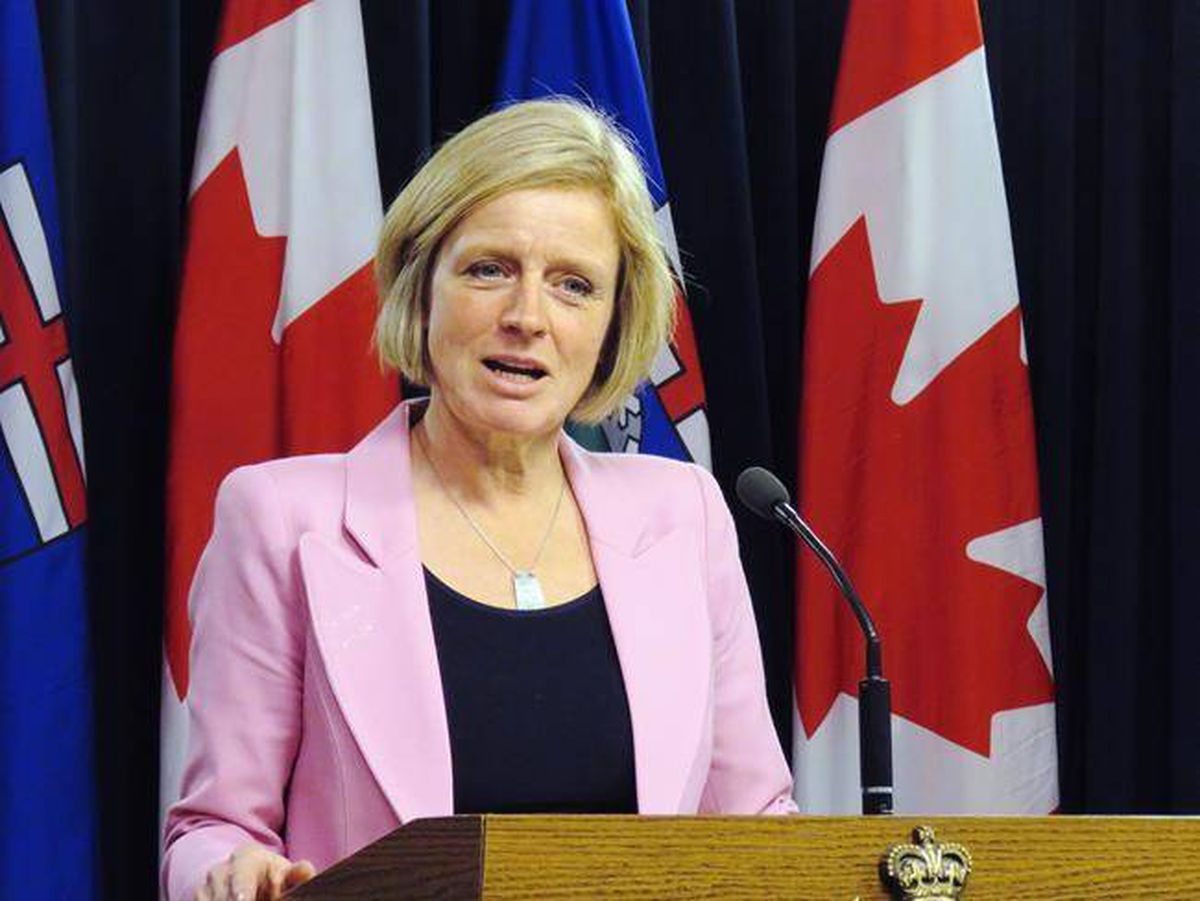 If the Federal Court of Appeal rules in favour of the Kinder Morgan Trans Mountain pipeline expansion in a verdict expected soon, Alberta can declare victory on the contentious project, Premier Rachel Notley says. Conversely, she said the death of the project would be a monumental setback to the federal government’s already embattled national climate plan, and further delay her provincial government’s plan to return to fiscal balance, already years away. “This is the single biggest thing people are waiting for,” Ms. Notley said this week of the consolidated lawsuit that the federal court is hearing. “It’s what investors are waiting for, it’s what Ottawa is waiting for, it’s what Kinder Morgan is waiting for. I think if the court supports the [National Energy Board] process, then I think it opens the door for the federal government to bring all of its resources to bear to get the job done. Assuming we are successful, I think we can declare victory and get shovels in the ground.” - Globe and Mail

No Moe oil to B.C.: A radical threat from a Sask. Party premier — Murray Mandryk

That a Saskatchewan Party premier is now allied in a potentially radical trade action with an Alberta NDP premier is a rather difficult thing to process. After all, it was not long ago that Highways Minister David Marit and former premier Brad Wall were talking about taxing Alberta license plates in trade retaliation for still-unproven allegations that the Alberta NDP government was banning Saskatchewan road construction companies. However, Premier Scott Moe’s decision to back Premier Rachel Notley in her threats to cut off oil to B.C., should that province’s NDP government block the $7.4-billion Kinder Morgan Trans Mountain pipeline, comes as no surprise. - Edmonton Journal

Four and a half years after moving to Vancouver to ready the massive LNG Canada project for a final investment decision, or FID, Andy Calitz likens the state of the mega-energy venture to that of a peak-performance Olympic athlete in the final seconds of a gold-medal race. It’s beating competitors at that point that makes the difference between winning and losing, said the Royal Dutch Shell PLC executive, one of the world’s top guns in LNG development. It’s a good thing, then, that after a tortuous seven-year struggle to find a way to deliver Canadian LNG at the lowest possible price to Asia, the South African engineer is feeling optimistic about building an LNG export terminal in Kitimat, B.C. “Apart from this relentless, Olympic-style competition to the last moment of getting costs down, down, down, there is not a single other major stumbling block to getting this project to FID,” Calitz, chief executive of LNG Canada, said in an interview at Shell’s Calgary headquarters, where he spends half his work week. - Financial Post

Discounts for western Canadian oilsands crude will remain high as railroads crank up their crude-by-rail rates in return for adding locomotives and crews to the transport constrained sector, according to an energy analyst’s report published Tuesday. Barclays Capital analyst Paul Cheng said he is increasing by US$4.50 per barrel his forecast for the difference between Western Canadian Select oilsands blend and U.S. benchmark West Texas Intermediate from 2019 to 2022, when new pipelines are expected to come on stream to relieve transportation headaches. “Based on our conversations with the industry, recent negotiations between rail operators and oil producers seem to suggest the all-in rail cost from Western Canada to the Gulf Coast may now settle toward US$20 per barrel, much higher than our previous assumption,” he said. - Global News

Cenovus Energy Inc. says it has been running its oilsands operations at reduced production rates and storing excess barrels due to wider-than-normal light-heavy oil price differentials and pipeline capacity constraints. The company says it has been operating its Christina Lake and Foster Creek facilities at reduced production levels since February. Cenovus chief executive Alex Pourbaix says when Canadian heavy oil is selling at a wide discount to West Texas Intermediate due to transportation bottlenecks, the company has significant capacity to store barrels in its reservoirs to be produced and sold at a later date. Cenovus is also evaluating opportunities to optimize the scheduling of maintenance and holding talks with rail providers to resolve a shortage of locomotive capacity. The company noted that while the strategy may result in fluctuating production from month to month, it continues to expect full-year oilsands volumes for 2018 to be within the its guidance of 364,000 to 382,000 barrels per day. - CTV News

Global energy-related carbon emissions rose to a historic high of 32.5 gigatonnes last year, after three years of being flat, due to higher energy demand and the slowing of energy efficiency improvements, the International Energy Agency (IEA) said. Global energy demand rose by 2.1% last year to 14,050 million tonnes of oil equivalent, more than twice the previous year's rate, boosted by strong economic growth, according to preliminary estimates from the IEA. Energy demand rose by 0.9% in 2016 and 0.9% on average over the previous five years. Over 70% of global energy demand growth was met by oil, natural gas and coal, while renewables accounted for almost all of the rest, the IEA said in a report. Improvements in energy efficiency slowed last year. As a result of these trends, global energy-related carbon dioxide emissions increased by 1.4% in 2017 to 32.5 gigatonnes, a record high. - Globe and Mail

Report: Coal's tipping point near, but climate goals are not — CP

Declines in coal power plant construction in China, India and the U.S. are projected to push the heavily-polluting fuel over the edge— but not fast enough to meet international climate change goals, environmental groups said Wednesday. Coal's dominance as the fuel of choice for generating electricity has been slipping as cheap natural gas and renewable energy sources challenge its decades-long reign. A joint report by the groups CoalSwarm, Sierra Club and Greenpeace projects that by 2022 retirements of older, more polluting coal plants will outpace new plant construction for the first time in the modern era. The findings are in line with data from the International Energy Agency, which recently declared coal was in a "decade of stagnation" with demand declining at a level last seen in the early 1990s. Having fewer coal-fired plants would bolster international efforts to move away from the cheap and widely available fuel. Coal accounted for about 70 per cent of worldwide power sector emissions of the greenhouse gas carbon dioxide in 2016, according to the International Energy Agency estimates. - The Chronicle Herald

Every member of the Manitoba Hydro board — except for Progressive Conservative MLA Cliff Graydon — resigned on Wednesday, amid a heated disagreement over what Premier Brian Pallister calls "persuasion money." Outgoing board chair Sandy Riley listed several points of disagreement with the province, most importantly that they couldn't get an audience with the premier. "For over a year we have attempted to meet with the premier to resolve a number of critical issues related to the finances and governance of Manitoba Hydro, including matters related to Hydro's efforts to further develop its relationship with Indigenous peoples," he said in a written statement. - CBC News

In a stunning and perhaps unprecedented move, Manitoba Hydro's Tory-appointed board of directors resigned virtually en masse Wednesday morning, claiming it has not been able to meet with Premier Brian Pallister to "resolve a number of critical issues.” Pallister shot back hours later, saying the real reason for the resignations was the provincial cabinet's decision to veto a planned Hydro payment of $70-million to the Manitoba Metis Federation to keep the organization from pressing for extended environmental hearings on the proposed Manitoba-Minnesota transmission line. - Winnipeg Free Press

U.S. oil production is set to hit a record 11 million barrels a day by 2019, according to latest figures from the U.S. Energy Information Administration. Meanwhile permits are being issued for further exploration in national parks and pressure is being put on deep water drilling and exploration in the Arctic. Domestic oil production is seen as a key to global U.S. energy dominance and is a priority focus of the current presidential administration. But what if these developments show the U.S. to be on the wrong side of history – does it really need more oil? In 2017, for the first time, the International Energy Agency predicted a peak in global oil demand by the 2030s. Similarly, BP’s Energy Outlook in 2018 predicted a plateau in oil demand - shifting its projections from mid-2040s to mid-2030s – moving a decade within one year. And yet the U.S. oil industry continues to invest heavily in more and more ways to develop oil and gas reserves. - Forbes

The Trump administration’s efforts to jump-start offshore exploration got off to a weak start as a big auction of oil and gas leases in the Gulf of Mexico drew few bidders, writes The Wall Street Journal’s Timothy Puko. President Donald Trump’s administration offered up enough acres for oil and gas drilling in the gulf to cover the state of New Mexico on Wednesday, in what Interior Secretary Ryan Zinke billed as the biggest such sale in U.S. history. But only 1% of the acres offered drew a bid, and the winners paid an average of $153 an acre, some of the lowest prices of the decade. Lease sales have languished for several years, since commodity prices plummeted more than three years ago. - Wall Street Journal

The Australian Securities Exchange said energy prices could rise and investment in generation could be stifled unless the Energy Security Board ensured there was transparency and liquidity in future electricity markets under the Turnbull government's proposed National Energy Guarantee. With the ESB faced with a daunting task to land the detail of the NEG ahead of next month's Council of Australian Governments meeting, the ASX said the delivery of a new emissions and reliability obligation on energy retailers needed to avoid unintended consequences. "Any solution should preserve and promote transparency and liquidity in forward prices. Forward price signals are fundamental to investment decisions and also for risk transfer," ASX head of strategic delivery (capital markets) Ken Chapman said in a submission to the ESB. "Any failure to meet this test is likely to result in higher electricity prices, and risks a lack of investment in electricity generation." - Australian Financial Review