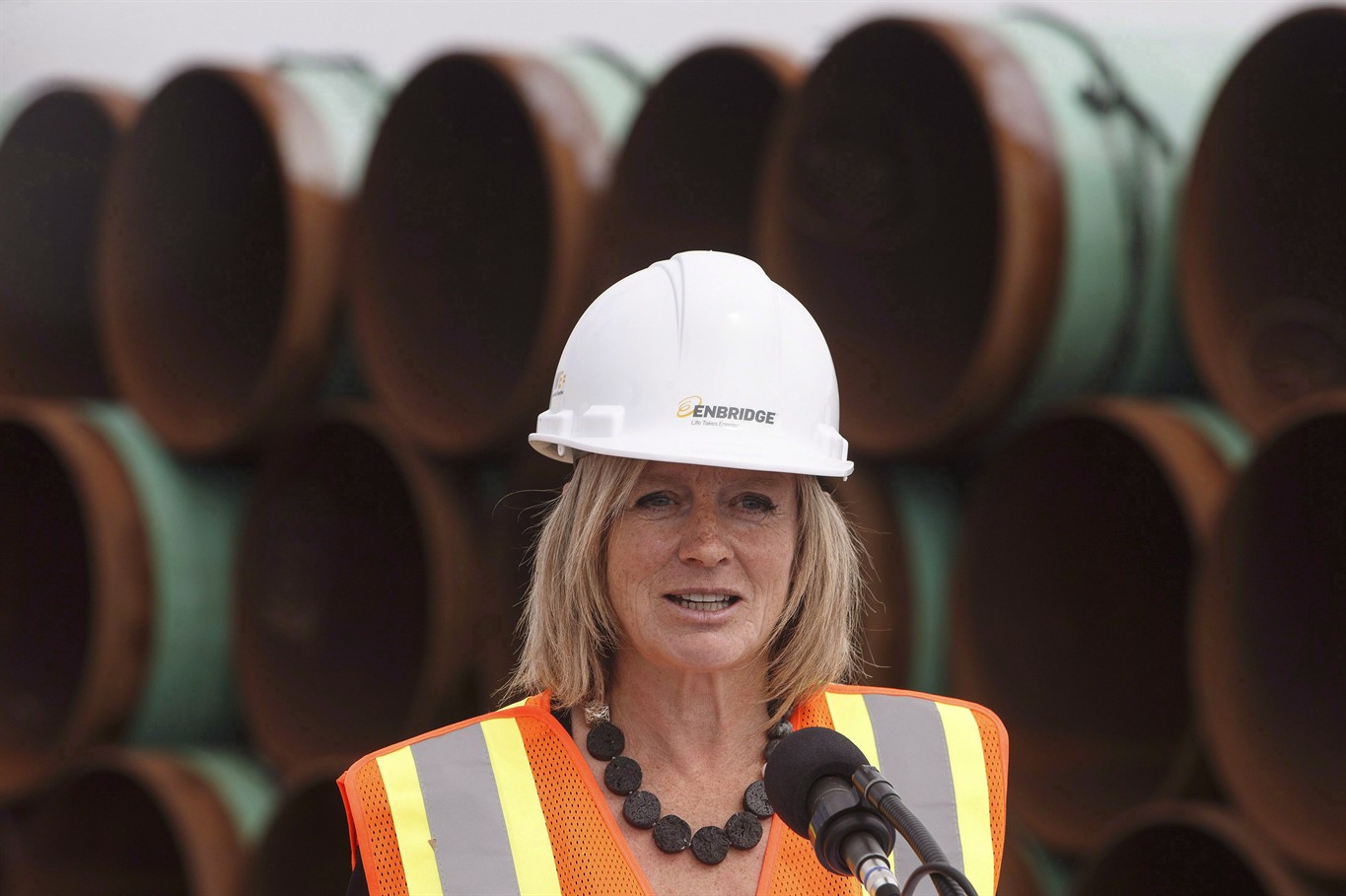 Years after TransCanada proposed the project in 2008, the state of Nebraska has finally approved TransCanada’s Keystone XL pipeline. The Obama Administration had tried to kill the project in 2015, but President Donald Trump reversed Obama’s decision when he took office. Nebraska did not approve TransCanada’s preferred route for the pipeline and instead proposed a much longer route with an additional processing station to avoid land where spills would threaten endangered species. TransCanada CEO Russ Girling issued a statement yesterday saying his company would study “how the decision would impact the cost and schedule of the project.” Environmental opposition groups have said the proposed new route could give them more ammunition with which to fight pipeline construction. - National Post

Alberta Premier Rachel Notley spoke Monday praising Nebraska’s decision to approve TransCanada’s Keystone XL pipeline, saying it was a step towards greater energy security for her province. “What it means is the Keystone pipeline will ensure that we’re able to maintain our existing markets to the Gulf Coast definitely less expensively and more safely.” Notley also spoke about the need for continued energy infrastructure so Canada could compete with other countries on the energy market. - National Post

Approval of the Keystone XL pipeline route by regulators in Nebraska was met with muted optimism Monday by some in the energy industry in Calgary. The Canadian Energy Pipeline Association issued a statement after the decision was announced, calling the approval "a long-awaited step forward for this critical project, which will offer significant economic benefits for Canada.” It's not the route TransCanada wanted but it's still a victory for the company as it clears the final big regulatory hurdle to getting the pipeline built. - CBC

Nebraska's decision on Keystone XL's final route was billed as the key regulatory ruling that would pull the long-delayed pipeline proposal out of a nearly decade-long limbo. Supposedly, the sound of bulldozers breaking ground would soon bring a giant sigh of relief from Canada's energy industry, and from both Alberta Premier Rachel Notley and Prime Minister Justin Trudeau, who could both sell the pipe as evidence they really do care as much about industry as they do the environment. Yet, the introduction of an alternate route also opens the proposal to another round of legal and regulatory challenges that could continue to mire the pipeline in pre-construction purgatory. - CBC

By “greening” our power grid, and putting a focus on energy from wind, solar, and hydro sources, Canada could significantly improve our competitiveness. It is true wind and solar power is intermittent and often not enough energy is generated from hydro sources. But great technological advances are being made in this field. Canada should look at long distance electricity transmission, as is done in China, in order to send clean energy to other parts of the country where it is not produced in as large a quantity. - Globe and Mail


Muskrat Falls inquiry’s report to be submitted to government by Dec. 31, 2019 — The Telegram

On Monday, Newfoundland and Labrador Premier Dwight Ball announced the terms of reference for an inquiry into the two years behind schedule, $12.7-billion Muskrat Falls hydroelectric project. The inquiry is expected to take two years. Justice Richard LeBlanc has been tasked with heading the inquiry, which will focus on establishing the facts on the decision to sanction the project, changes in cost and timeline, the exemption of the project from Public Utilities Board oversight, whether or not the government has remained fully informed of risks and problems arising, and whether or not appropriate oversight measures were employed. Opposition PC government leaders have said they have nothing to hide in the investigation and former Premier Danny Williams said he is pleased the inquiry has been called. The Government of Newfoundland and Labrador remains committed to seeing the project through as it is now about 86% complete. - The Telegram


Refuse to be part of the herd — Jerry Agar

Herd mentality is strong when it comes to the issue of climate change and global warming. Anyone who disagrees with the climate change alarmist mentality is often slapped with the title of “climate change denier.” This title is given to people who merely question the validity of carbon pricing as a means of addressing climate change. Environment Minister Catherine McKenna has gone even farther, by accusing people of being “gender climate deniers,” i.e. those who fail to acknowledge that “in a warming world, women fare worse.” We have an obligation in situations like this to not follow the crowd, and think for ourselves. - Toronto Sun

On the 30th anniversary of the signing of the Montreal Protocol, which committed to lowering the amounts of greenhouse gas emissions being released, a new amendment called the Kigali Amendment has been signed. Environment Minister Catherine McKenna said the amendment could lead to the avoidance of up to 0.5 degrees Celsius of warming by the end of the century. It calls for a reduction of levels of hydrofluorocarbons, which are used in products like refrigerators and air conditioners. The Amendment is scheduled to take effect in January 2019. - Toronto Star

Nebraska regulators approved a route for TransCanada Corp’s Keystone XL pipeline through the state on Monday, removing a big regulatory obstacle for the long-delayed project backed by President Donald Trump, but leaving its future shrouded in legal and market uncertainty. The 3-2 vote by the Nebraska Public Service Commission helps clear the way for the pipeline linking Canada’s Alberta oil sands to refineries in the United States. But opponents have promised to tie the project up in court for years and TransCanada is still studying its commercial viability after a surge in U.S. drilling that has cut crude oil prices roughly in half since the pipeline was first proposed. - Gulf News

Soaring electricity prices are leaving more customers mired in debt, and fewer of those who enter hardship programs are successfully escaping, while more are being cut off, an annual report on retail energy markets says. The Australian Energy Regulator's annual retail market report found electricity debt levels had increased to an average $690 in the year to June 30 and 1,083 more electricity customers were disconnected, with increases in Queensland, the capital territory and South Australia and a decrease in NSW. On the bright side fewer gas customers were cut off. The regulator's report came as Victorian Essential Services Commission chairman Ron Ben-David warned energy rip-offs by retailers are getting worse, in a blast that added to the groundswell to re-regulate retail energy contracts. - Australian Financial Review

2017 may yet be the year that Australia gets the integrated energy and climate-change policy it needs. Then again, political opportunism and rancorous criticism of the proposed National Energy Guarantee (NEG) could see another reasonable proposal added to the rubbish heap of previous attempts. The first and loudest critique is that the NEG is anti-renewables or pro coal. Yet low-cost renewables will get a high market share. The only real test of the NEG should be whether it fulfils the dual objectives of: providing an emissions reduction trajectory that enables Australia to meet its international climate change commitments at low cost; and achieving this without compromising the security and reliability of the power system. There is a strong argument that it does so. - Australian Financial Review