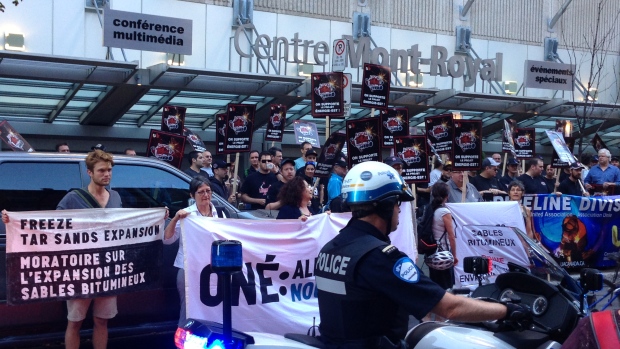 In the wake of TransCanada's announcement that it will no longer be pursuing Energy East, a familiar chorus of politicians have emerged to blame various actors for the pipeline's demise. Conservative MPs and premiers pointed to Prime Minister Justin Trudeau. Leadership hopefuls for Alberta's United Conservative Party framed it as a direct failure of Premier Rachel Notley. And federal Liberals explained it vaguely as a "business decision" based on "market conditions." This blame game, however, has largely ignored the significant role social movements played in derailing the pipeline. Indeed, thousands of concerned citizens have been working to change the discourse and timelines surrounding this project since it was first floated back in 2012. - CBC

The Saskatchewan government has given Husky Energy permission to restart a 16-inch pipeline that was shut down after 225,000 litres of heavy crude spilled near and into the North Saskatchewan River last summer. Government prosecutors, meanwhile, are still looking into whether the Calgary-based company should face environmental charges, which could result in millions of dollars in fines, for the July 20, 2016 incident. - Saskatoon Star Phoenix

The U.S. energy secretary defended his plan to reward nuclear plants with incentives against criticism it would manipulate markets by telling a congressional hearing on Thursday that a strong domestic nuclear industry boosted national security. Rick Perry pushed the Federal Energy Regulatory Commission on Sept. 29 to issue a rule within 60 days that would reward aging nuclear and coal-fired power plants that store 90 days of fuel on site. He has said those plants should be supported for their ability to boost the reliability of the U.S. power grid. - Economic Times

State energy ministers warned they would not rubber stamp any attempt by the Turnbull government to "spike the growth in renewable energy" and revive old coal fired power stations on their way to the "glue factory". Industry also set its sights low for the government's response after energy minister Josh Frydenberg told The Australian Financial Review's National Energy Summit 2017 on Monday that the cost of wind and solar power had fallen so far that the technologies could flourish without a scheme to encourage clean energy investment and it was time to focus on reliability. The Turnbull government is expected to respond as early as Monday or Tuesday to the last item of unfinished business of the Finkel review of energy - the Clean Energy Target - with a policy that focuses on the reliability of the power grid and strives to keep some coal fired power stations going longer than scheduled. - Australian Financial Review