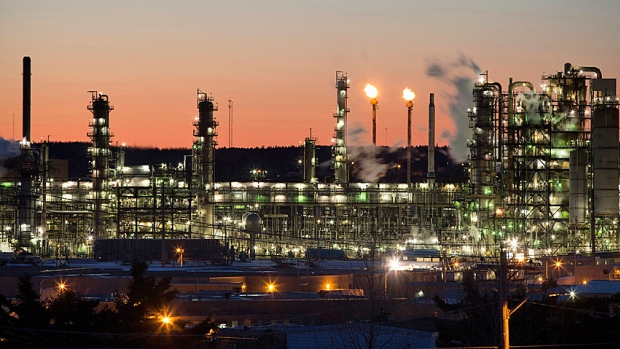 Irving Oil Ltd. says any New Brunswick carbon plan needs to allow the province's businesses to remain competitive. Premier Brian Gallant's government announced in Tuesday's throne speech that his Liberal government would bring in carbon pricing that helps combat climate change. The premier says the pricing model will minimize the impact on consumers while calling on industry to reduce emissions or pay its fair share. Irving Oil said in a statement to The Canadian Press that 80 per cent of its production goes to the United States, where its competitors face no carbon tax. - CBC

New Brunswick’s Liberal Premier Brian Gallant says a price on carbon emissions is coming, one that “minimizes” the impact on consumers and makes industry “pay its fair share.” In remarks to media before his government’s throne speech Tuesday, Gallant said a carbon pricing mechanism would be delivered in the last year of his four-year mandate. Just what that will be is difficult to figure out, raising criticism from the opposition parties. “There are many models being used around the world, and we’re doing everything we can to get a sense of what would be the best solution for us,” Gallant told reporters at Chancery Place, home of the premier’s office. “The legislation will establish a carbon price that minimizes the impact on consumers, calls on large industry to reduce emissions or pay its fair share,” the lieutenant-governor read. - Telegraph Journal

TransCanada’s withdrawal of its Energy East Pipeline project has elicited strong reactions in certain quarters of western Canada, including the accusation that Quebec is an economic adversary of Alberta. I was in Calgary and Edmonton two weeks ago and pointed out that trade in goods and services between Quebec and Alberta stands at $16-billion a year. For those who would like us to engage in mutual bashing I reply: do we want our trade to increase to $25-billion, or fall to $5-billion? If we want to expand our trade and take advantage of all of the other possibilities that reconciliation can generate, it is essential to go beyond perceptions and to understand the facts. - Montreal Gazette

The Quebec government is reaching out to Alberta and calling for “reconciliation” in light of anger in the province over the demise of the Energy East pipeline project. The celebratory reaction of some Quebeckers to the end of Energy East has become fodder in the race to become leader of Alberta’s new United Conservative Party. Candidates Jason Kenney and Brian Jean have taken aim at Quebec politicians over the issue and both have doubled down on their call for changes to the federal equalization program in response. - Calgary Herald

The United States discriminated against the nuclear and coal industries under the administration of former President Barack Obama, U.S. Secretary of Energy Rick Perry said on Wednesday. “Nuclear and coal ... Those two industries were discriminated against over the course of the last administration,” Perry told reporters at an oil conference in Cape Town, when asked about a U.S. government directive to support ageing coal and nuclear plants. The directive would reward certain nuclear and coal-fired plants that store 90 days of fuel on site for contributing to the reliability of the national grid. - Reuters