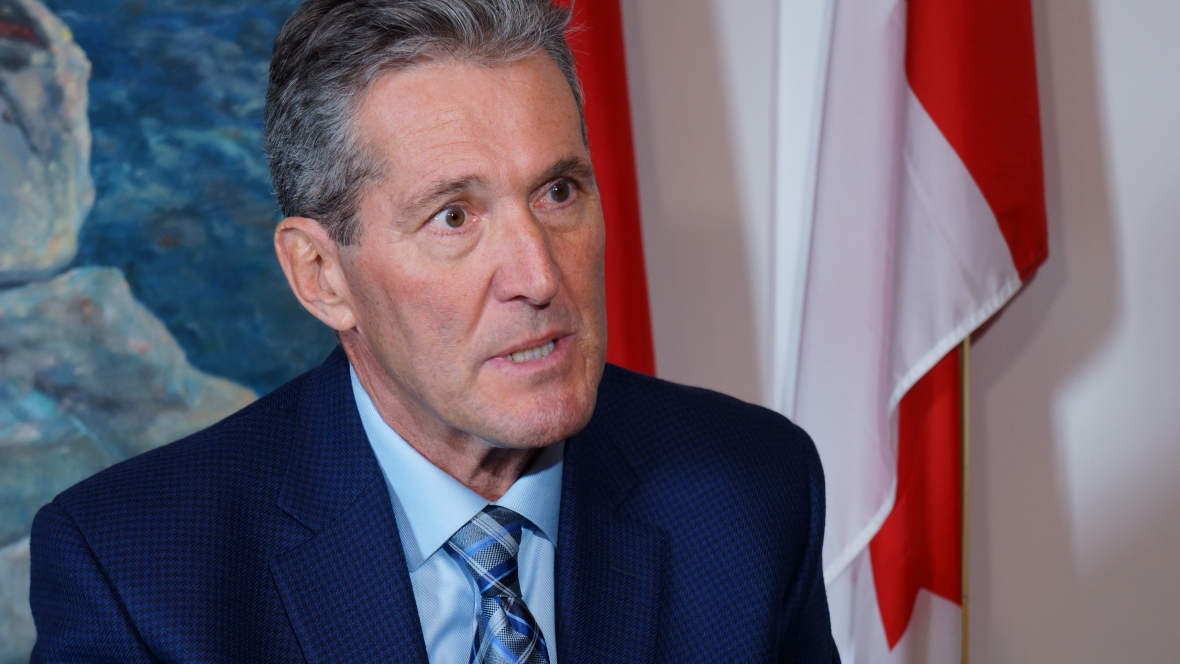 Manitoba Premier Brian Pallister is set to unveil a $25-per-tonne carbon tax, defying the federal Liberal government's demand for a $50 levy. At an event scheduled for Friday morning, the Premier will announce that his government will impose the $25 levy on emissions from fossil fuels in 2018 – equivalent to 5 cents per litre on gasoline – and keep it at that level for the next five years. The carbon tax is part of a "made-in-Manitoba" climate plan that was promised by Mr. Pallister, who last year joined Saskatchewan Premier Brad Wall in refusing to sign Ottawa's pan-Canadian climate plan. Manitoba argues that its $25 levy will be as effective in reducing greenhouse-gas emissions as the federal plan, which calls for a $10 carbon tax to be implemented next year, climbing to $50 by 2022. Manitoba's tax will be accompanied by a more flexible levy that will be imposed on a handful of large industrial emitters, including U.S.-based Koch Industries Inc.'s fertilizer plant in Brandon. Details of that industrial levy have yet to be worked out. Prime Minister Justin Trudeau has vowed to impose a federal carbon tax on provinces that do not adopt their own, or meet the federal minimum of either $50 per tonne by 2022 or a cap-and-trade system that accomplishes equivalent GHG reductions. Mr. Pallister is also refusing to accept a federal target of reducing GHG emissions by 30 per cent below 2005 levels by 2030, a target Ottawa committed to under the Paris climate accord. Instead, the province will set a five-year GHG target. - The Globe & Mail

Manitoba's Progressive Conservative government will announce a carbon tax of $25 a tonne Friday — to be implemented sometime next year — and keep it at that rate, a government source familiar with the file confirmed to The Canadian Press. The source, who spoke on condition of anonymity because they were not authorized to speak on the record, said the province will refuse to follow federal government demands to raise the tax to $50 a tonne by 2022. - Canadian Press

Farm fuel will be exempt from a carbon tax, Manitoba Premier Brian Pallister said in an interview Thursday on the eve of announcing his government’s Made-in-Manitoba Climate and Green Plan. “It does exempt some farm costs — farm fuel, for example,” he said. “I know we’ll get pushback from some industry groups that are not agriculture. But the farmer is in a different situation. For the most part they are a taker of international price. They don’t have the ability to raise a fee or a levy on a customer so it would handcuff the ag community to a degree.” - Manitoba Co-operator


Do the right thing, spike the carbon tax — Editorial

The Pallister government has strongly hinted that Friday’s announcement may include new carbon taxes for Manitobans, which would be a catastrophic error. There is no evidence from anywhere around the world that carbon taxes reduce emissions, not unless the tax rates are so high that they also have a deleterious effect on the economy. Carbon taxes do one thing and one thing only: they raise new revenues for government. They are brought in under the false claim that they will discourage people from burning carbon, when in fact they will do nothing of the kind. This is a new, fashionable way for governments to reach further into taxpayers’ pockets, plain and simple. - Winnipeg Sun


Canada's fossil fuel use to peak in 2019 — Robson Fletcher

The National Energy Board now projects fossil fuel use in Canada will peak in 2019, a major downward revision of similar estimates it has made annually for the past decade. It's the first time in the 11-year history of the NEB's annual reports on the topic that a peak in fossil fuel demand has been included in the baseline projection. Previous reports projected demand would increase for the next two or three decades, at least. - CBC


Less electricity use but higher bills for Ontarians — Antonella Artuso

Ontario households are using less electricity but will still see their monthly bills rise steadily over the next decade to $186 a month or $2,232 a year. According to the Ontario Long-Term Energy Plan released Thursday, the lowest electricity bills – less even than this year’s bills – will be in 2018, an election year, when the average residential monthly bill is projected to be $123. After that, prices will rise by about 2-3% a year until 2022, when the annual increases will be in the 7-8% range. Energy Minister Glenn Thibeault said the Fair Hydro Plan has reduced electricity bills for families by an average of 25%, and keeps increases to the rate of inflation for four more years. “Following this period, our long-term energy plan lays out a path for predictable, affordable electricity prices,” Thibeault said. - Toronto Sun

There could be thousands of people who will use the recently created Affordability Fund to help pay for their high hydro bills. The $100-million program will give residents LED lights, heat pumps and energy-efficient appliances to reduce their energy costs. Homeowners will also qualify for home energy kits, which include light bulbs, power bars and/or faucet aerators residents can install themselves. Residents can also qualify for in-home visits and possibly energy-efficient appliances, such as air conditioners and refrigerators, thermostats and even heat pumps. - HamiltonNews.com

One Torontonian says the city is making it impossible for him to drive the electric car of his dreams. James Scarrow put a deposit down on a Tesla Model S electric vehicle (EV), but discovered the city won't give him a permit to build a charging station outside his Toronto home near Broadview and Danforth, because he uses on-street parking. Scarrow hoped to run power from his home to the vehicle by going underneath the sidewalk, but he says the contractors who specialize in installing the chargers told him they couldn't do any work on city property. - CBC

A shale gas drilling boom over the last decade has propelled the United States from energy importer to exporter, and the country has taken a giant leap toward the goal of energy independence declared by presidents for half a century. Now the upheaval of the domestic energy sector is going global. A swell of gas in liquefied form shipped from Texas and Louisiana is descending on global markets, producing a broader glut and lower energy prices. The U.S. was supposed to be a big importer, not a world-class exporter, of liquefied natural gas, or LNG. The frenzy of drilling in shale gasfields across the United States changed that over the last decade, creating a glut far larger than domestic demand could possibly consume. Companies that spent billions of dollars to build import platforms suddenly had useless facilities until they spent billions more to convert them for export. The switch will remake the global gas market for decades to come. - Hellenic Shipping News