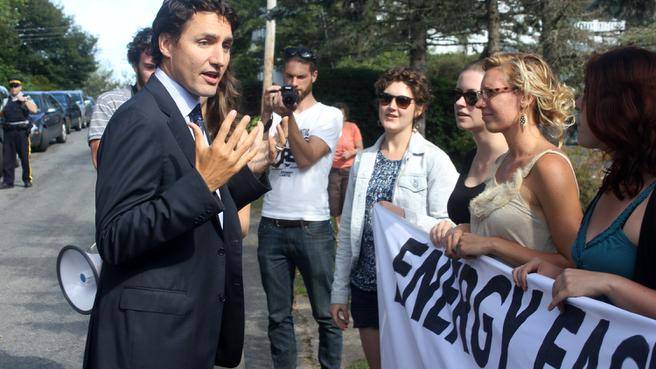 For those of us who hoped the proposed $15.7-billion Energy East project would finally join Atlantic Canada to the national pipeline network — and give us secure access to Western Canadian oil that Ontario and Quebec have benefited from for six decades — last week’s decision by TransCanada Corp. to put the project application on a 30-day hold is a disappointment and grave concern. But given the National Energy Board’s erratic handling of the Energy East hearings, TransCanada’s move is not such a surprise. The company is seeking a 30-day suspension of the application “to conduct a careful review of recent changes announced by the NEB regarding the list of issues and environmental assessment factors” of the project. It wants to understand how the changes — which it called “significant” — impact project “costs, schedules and viability.” - Chronicle Herald

Plaster Rock Mayor Alexis Fenner is hoping TransCanada won’t decide to drop the Energy East pipeline. The route is very close to his town, and Ms. Fenner was hoping the pipeline would bring an economic boost to her community. “I don’t want to see the project stopped”, said Fenner. “It would be good for our community and phenomenal for our province.” The mayor also said she finds pressure from environmentalists for a tougher review process “frustrating.” The mayor said crude oil will continue to be transported through communities and across rivers in railway cars and that presents a greater risk to the environment than a pipeline. The Energy East pipeline “is safer than moving it by train.” - Telegraph Journal

Nova Scotia Power customers will be getting some money back over the next three years as a result of the delays in completing the Nalcor-owned Muskrat Falls generating station in Newfoundland and Labrador. The Nova Scotia Utility and Review Board has given NSP Maritime Link Inc., a subsidiary of Emera Inc., approval to charge Nova Scotia Power and its customers for costs related to the construction of the Maritime Link – the transmission system to get the power from Muskrat Falls. The review board's interim assessment, released Monday, is for $109.5-million in 2018 and $111.5-million in 2019. The amounts are already being collected from customers in Nova Scotia as part of a three-year rate stability plan for 2017-2019. However, the board ruled that $105 million in costs should not be recovered yet, and as a result, ratepayers should receive an annual credit on their power bills over the next three years. The actual credit will vary by customer class. - CTV News

The Donkin Coal Mine in Cape Breton has begun operating its coal handling preparation, and processing plant or washplant. Owned by Kameron Collieries ULC, the mine target production level is about 350,000 tonnes to 450,000 tonnes in 2017, 1.2 million to 1.8 million tonnes in 2018, and 2.6 million to 2.75 million tonnes of saleable coal in 2019. Currently, coal production is being stockpiled on site and trucked and stockpiled at the Provincial Energy Ventures port in Sydney for eventual export. - The Chronicle Herald

After the Fort McMurray wildfire forced the event to take a one-year hiatus, the Oil Sands Trade Show & Conference is back in town on Tuesday and Wednesday. Sixteen months after the fire, the city's largest hotel chain said its 832 rooms are all booked up. "Any event of this nature to help us is absolutely great," said Jean-Marc Guillamot, area director for the Fort McMurray Hotel Group. "It has been a struggle with the expectation of the boom. Building has not trickled down to the hotel industry." - CBC

Harvey made landfall in southern Texas in late August and idled parts of the U.S. energy sector for weeks. Some refineries in the area are still out of service and it could take several weeks for sector activity to return to normal. With no refineries of its own, Florida gas stations ran dry before Irma hit its southern coast earlier this week. "There is not a gasoline shortage in the United States, but instead localized challenges – power outages, impassable roads, debris – in Florida keeping gasoline supplies from where they are needed most," AAA spokesperson Jeanette Casselano said in a statement. "Total U.S. gasoline stocks sit above the five-year average." - United Press International

The federal government has confirmed the Clean Energy Target as proposed by Chief Scientist Alan Finkel will be overhauled and replaced with a policy that will place much greater emphasis on coal-fired baseload power and possibly a slower transition to renewable energy. At the same time, energy regulators and industry sources suggested there was no need to prolong the life of the Liddell Power Station in NSW and that energy shortfall created by its closure in 2022 could be met by other means. The federal government has given AGL Energy 90 days to reveal long-term plans to replace the generation capacity of the Liddell Power Station, even though there was no national energy policy to guide the process. - Australian Financial Review

Western Europe's largest oil and gas industry has survived a scare as exit polls predict that Norwegian voters have delivered the centre-right Conservative Party an historic re-election in the national poll overnight. With 90% of the vote counted, incumbent prime minister Erna Solberg, who swept to power in 2013, is projected to return in a coalition that aims to extend drilling in the oil-rich North Sea. Despite pollsters forecasting the tightest race in decades, Solberg will continue to govern with a comfortable majority. It is the first time Norwegians have re-elected a Conservative government in more than two decades. The environment and, by extension, the future of Norway's major industries took centre stage in a campaign seen as a battle for the long-term future of the Norwegian economy. A feature of this election was the rise of environmentalist parties aiming to end the country's reliance on oil and gas. - Australian Financial Review