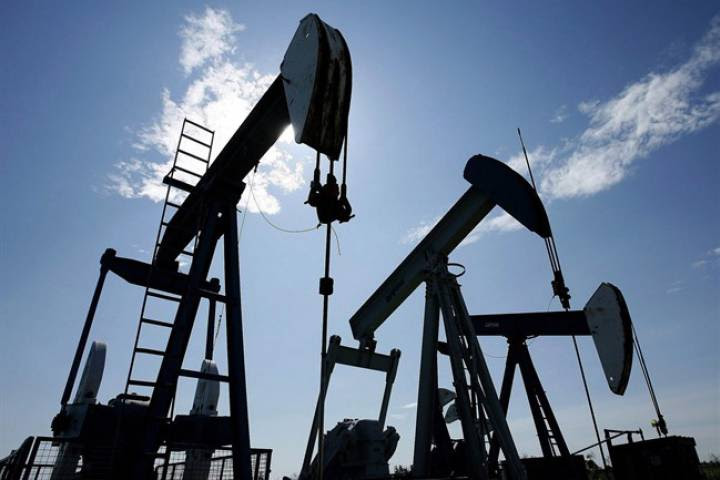 Global oil prices have soared to their highest levels in four years, in what should be bad news for Canadian consumers' budgets and good news for the country's oil exporters. But Canada's oil industry has been shut out of the recent bonanza. Canadian oil exports are selling at their steepest discount in years, the result of industry and policymakers' inability to build pipelines to new, non-U.S. markets. While climate groups and other industry opponents celebrate victories in delaying new pipelines, the lack of infrastructure hasn't slowed Canada's oil exporters: Rather, they are increasingly turning to rail. There are now more oil trains criss-crossing Canada than ever before, and their numbers are expected to continue growing rapidly in the coming months. Western Canadian Select — the benchmark price for oilsands product — was trading at just above US$30 per barrel on Thursday, a 58% discount compared to West Texas Intermediate, the benchmark price for North American oil. Canadian oil is currently the cheapest in the world, according to data compiled by OilPrice.com. - Huffington Post

For three of the largest Asian energy markets, the reactions to the Federal Court of Appeal’s August decision to overturn Ottawa’s approval of the Trans Mountain pipeline elicited a wide range of responses – some optimistic, others much less so.  For China, the world’s largest importer of oil, Canada’s decision to send the pipeline project back to Square 1 should concern Canadians, one Chinese academic said, because Beijing has been aggressively adding potential suppliers to its partnership list through its One Belt, One Road (OBOR, also known as BRI) regional development initiative. As such, it would be Canadian economic interests that have the most to lose because China’s thirst for oil has found other – and, in many cases, more convenient – sources that Beijing can pursue without waiting for Ottawa to untangle the Trans Mountain issue. - JW Energy

Leaders from Northern Ontario First Nations and Municipalities today called on Ontario to proceed without further delay on the multi-million-dollar East-West Tie transmission project. Together, key stakeholders in the region are calling on the Ford Government to pull the trigger and make the decisions needed to ensure socio-economic prosperity for all. Municipal leaders and First Nations have issued letters to the Ontario Energy Board (OEB) expressing their serious disappointment in the process, which saw the former Liberal Government allowing Hydro One to disrupt the positive status of the East-West Tie transmission project - which had previously been on schedule and a much-needed good news story in Northern Ontario for several years. NextBridge won the bid through a fair, open and transparent process. - NewsWire

Noting the effort that goes on behind the scenes, a recent leadership honour from the Ontario Energy Association should be recognized as a team award, says the head of Union Gas. Steve Baker, president of the utility, received the OEA Leader Award for contributions to the energy sector over the past year. The OEA awards also include such areas as customer service, innovation and employee excellence. “I’m certainly honoured and humbled to receive the award and the recognition from my peers and other leaders in the industry,” Baker told The Daily News. “But from my perspective it’s really a Union Gas award. “I could never do what I do without all the talented and dedicated group of leaders and employees all across the company.” With the booming demand for natural gas, particularly for residential and economic development in rural areas, the utility has been undertaking a number of infrastructure improvements. - Chatham Daily News

A tax increase and a continued slump in the price of natural gas means B.C. customers are paying more for the carbon tax than they are for the gas they use. B.C.’s carbon tax on fossil fuels went up April 1 for the first time since 2013, increasing the charge for natural gas as well as gasoline, diesel, coal and other carbon-based fuels. That coincides with the lowest price of natural gas in more than a decade. The carbon tax increase doesn’t sit well with Chilliwack resident Wayne Dance, who keeps a close watch on his energy use and sees no viable alternative for natural gas heating. B.C.’s carbon tax is charged on the amount of emission, whatever the price of fuels. This year’s increase, imposed a year earlier than the NDP proposed as a condition of the B.C. Green Party supporting their minority government, brings the carbon tax to $35 a tonne of carbon dioxide or equivalent emissions. - Chemainus Valley Courier

Newly minted Ontario Premier Doug Ford is coming to Alberta next month for a United Conservative Party rally opposing carbon tax programs. Ford will attend the free Oct. 5 event at the BMO Centre, where he’ll be hosted by UCP Leader Jason Kenney. Ford scrapped Ontario’s cap-and-trade system after taking office in June and has vowed to legally challenge the federal government’s contentious carbon pricing plan. Alberta’s broad-based carbon levy, a core element of the NDP government’s climate plan, is $30 per tonne of carbon dioxide emissions. When applied to gasoline, the tax is almost seven cents per litre. Kenney has vowed to repeal Alberta’s carbon tax should the UCP form government following next spring’s provincial election. The federal climate plan — to take effect in January — calls for taxes on greenhouse gas emissions starting at $10 per tonne and rising by $10 a year to $50 a tonne in 2022. - Calgary Herald

When a global military crisis occurs, one of the first questions is, “Where are the aircraft carriers?” And when an energy crisis hits us here at home it is often, “Where is the oil?” The answer to both questions depends on careful planning that anticipates future needs. It takes about 10 years to move next-generation aircraft carriers from the drawing boards through the approval processes to actual deployment in potentially hostile environments. Not coincidentally, it takes about 10 years to research, gain approvals and deliver to market the oil and gas products that will service America’s energy needs. Both of these processes must continue to succeed for our country to remain the strongest in the world, economically, militarily and technologically. Energy wealth and national security go together. An “all-of-the-above” energy policy — including renewables — is important, but natural gas and oil are essential. Government projections show that even under optimistic scenarios for renewables, natural gas and oil will supply about 60% of U.S. energy needs in 2040. - Virginian Pilot Online

This month, the U.S. Interior Department unveiled final revisions to an Obama-era rule aimed at curbing methane emissions from oil and natural gas operations on federal lands. The Environmental Protection Agency also recently announced proposed improvements for the 2016 New Source Performance Standards designed to ease regulatory burdens on domestic energy producers by modifying the frequency for monitoring leaks at well sites and compressor stations and adopting other important technical corrections to the original NSPS rule. Both efforts seek to address overreaching regulatory issues advanced under the previous administration to support reasonable standards that protect the environment, encourage increased domestic energy production, as well as recognize the significant progress that has made in reducing energy emissions without excessive regulations designed to hamper oil and gas production. The rollback of unnecessary and overly burdensome regulations under President Trump’s American Energy Dominance agenda has contributed to record U.S. oil production and countless related benefits afforded to our society. - Victoria Advocate

Santos chief executive Kevin Gallagher says he doubts the oil price will move much higher beyond its current strong levels as he vowed not to repeat the mistakes of the past at the company which has a new-found confidence after dark times in 2015 and 2016. Mr Gallagher said Santos was now much more ambitious after pulling itself out of a hole, which had largely been self-inflicted, but it wouldn't get caught up again in cost blowouts and budget over-runs during the good times in the industry. Oil prices have almost tripled to more than $US81 per barrel since January 2016. - Australian Financial Review