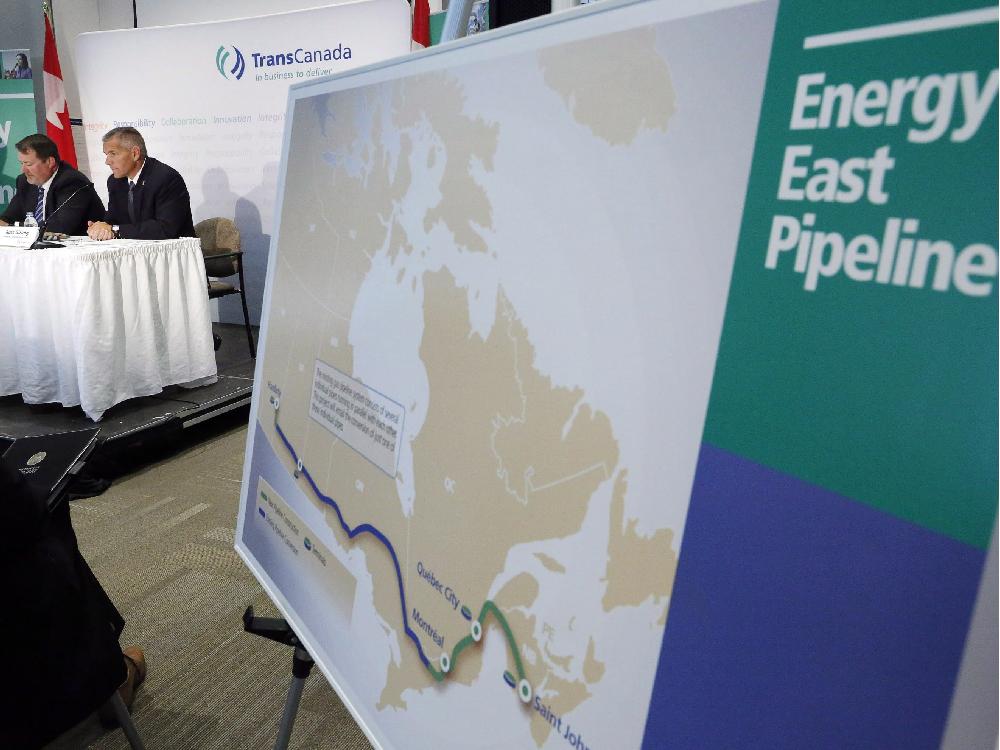 TransCanada will suspend the application for its Energy East pipeline for 30 days and may abandon the project, the company said on Thursday, weeks after the National Energy Board (NEB) regulator announced a tougher review process. TransCanada will do a "careful review" of the new assessment process to gauge its effect on the costs, schedules and viability of the pipeline to the Atlantic coast, the company said in a statement. Assessing indirect emissions had been opposed by TransCanada, which had called it "completely redundant and unnecessary." - CBC

TransCanada Corp. is seeking to halt a federal review of its $15.7-billion Energy East pipeline, raising the possibility the project could get scrapped in a move that would spare Prime Minister Justin Trudeau from having to make a politically charged decision on the project's fate. TransCanada late on Thursday asked the National Energy Board for a 30-day suspension to study possible impacts of the regulator's move to examine whether the project and a related pipeline fit with Canada's commitments to reduce greenhouse gas emissions (GHGs). Under a toughened review unveiled last month, the NEB said it would assess how construction of the contentious pipeline would affect GHGs from the production of the crude flowing through it. - Globe & Mail

New Brunswick Premier Brian Gallant says he will do whatever necessary to make sure the $15.7-billion Energy East pipeline proceeds and delivers crude — and jobs — to his province. Gallant was responding to a surprise announcement Thursday that TransCanada Corp. (TSX:TRP) wants to suspend for now its application to build the proposed 4,500-kilometre pipeline, which would carry crude from Alberta and Saskatchewan to refineries in Saint John, N.B., and other parts of Eastern Canada. TransCanada said it has filed a letter to the National Energy Board asking for a 30-day suspension for the project so it can study how the NEB’s decision last month to consider the Energy East’s contribution to upstream and downstream greenhouse gas emissions will affect “costs, schedules and viability.” - Calgary Sun

Two new reports show customer-sited energy storage is one of America’s fastest-growing energy technologies, with record-breaking installations in the second quarter of 2017. Energy storage could soon become a standard offering for U.S. utilities looking to diversify their business models and improve grid resiliency in the face of increasing extreme storms like Hurricanes Harvey and Irma. Fortunately, this trend could have an even larger impact beyond the bottom line for utilities and consumers in an era of extreme weather. Embracing energy storage paired with distributed generation can protect critical infrastructure, help businesses stay open, and keep the lights on during power outages caused by severe storms. - Forbes

How Renewables Can Save Natural Gas: David Fickling

It's worth thinking about how transformatively cheap renewable power is becoming. Unlike petroleum, coal and nuclear, it runs on a fuel that's essentially free, but critics are right about one drawback of renewables: their vulnerability to sudden drops in output when the wind dies or clouds block the sun. That's where gas comes in. In the first seconds after wind and solar output falls on a change in the weather, rechargeable batteries might be best placed to provide instant electrons. After that, though, pumped-storage dams and then peaking gas turbines will be able to provide less costly generation for hours until variable renewable generation recovers. - Bloomberg

Last thing the government should do is buy a power station: Robert Carling

One of the most common debates in economics is when should government intervene in markets? Government itself — judging by its recent actions — clearly thinks the answer is "quite often." Can there be any doubt that intervention is increasing? The intervention du jour is energy markets, ranging from export controls to the extraordinary proposition that the federal government — or even the New South Wales government — may invest directly in, or subsidise, a power station; with the main focus on Liddell in the New South Wales Hunter Valley. But, the energy crisis is not a result of market failure; instead it's a litany of government failure over many years. Successive governments — federal and state, Coalition and Labor — share the responsibility for making a hash of energy policy. So it's a case of bad market intervention begets more intervention. This time they need to get it right — and "they" means both government and opposition, because investment in increased supply depends on a stable, predictable policy environment for the long term. - Australian Financial Review