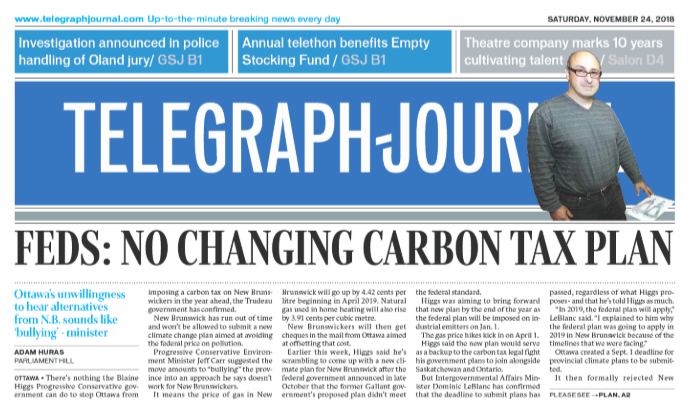 OTTAWA • There’s nothing the Blaine Higgs Progressive Conservative government can do to stop Ottawa from imposing a carbon tax on New Brunswickers in the year ahead, the Trudeau government has confirmed.

New Brunswick has run out of time and won’t be allowed to submit a new climate change plan aimed at avoiding the federal price on pollution.

It means the price of gas in New Brunswick will go up by 4.42 cents per litre beginning in April 2019. Natural gas used in home heating will also rise by 3.91 cents per cubic metre.

New Brunswickers will then get cheques in the mail from Ottawa aimed at offsetting that cost.

Earlier this week, Higgs said he’s scrambling to come up with a new climate plan for New Brunswick after the federal government announced in late October that the former Gallant government’s proposed plan didn’t meet the federal standard.

Higgs was aiming to bring forward that new plan by the end of the year as the federal plan will be imposed on industrial emitters on Jan. 1.

The gas price hikes kick in on April 1.

Higgs said the new plan would serve as a backup to the carbon tax legal fight his government plans to join alongside Saskatchewan and Ontario.

But Intergovernmental Affairs Minister Dominic LeBlanc has confirmed that the deadline to submit plans has passed, regardless of what Higgs proposes - and that he’s told Higgs as much.

Ottawa created a Sept. 1 deadline for provincial climate plans to be submitted.

It then formally rejected New Brunswick’s plan on Oct. 23.

The House of Commons passed an order-in-council in late October giving instruction to the Canada Revenue Agency to collect the price on carbon.

Carr said the Tories will still push ahead with crafting a backup plan, while expressing disappointment with LeBlanc’s comments.

He added that the Higgs government is only a few weeks old and should be given “a little bit of leeway” to submit a new plan.

LeBlanc said there is an annual review of provincial plans as the price on carbon is scheduled to increase annually from $20 per tonne in 2019 to reach $50 per tonne by 2022.

That means a Higgs plan could be considered for 2020.

Meanwhile, LeBlanc said there are a series of “companion initiatives” the federal government can work on with Higgs.

“I said to him we were absolutely open to having an ongoing conversation on a whole bunch of measures different than simply the price on pollution which is a key part of our plan, but not the only part,” LeBlanc said.

That includes the financing of major energy projects, such as NB Power’s multi-billion-dollar refurbishment of the Mactaquac dam.

The infrastructure bank is mandated to spend $35 billion over 11 years, with hopes it can leverage four to five times that in outside investments toward building new Canadian transportation networks, energy generation and other priorities.