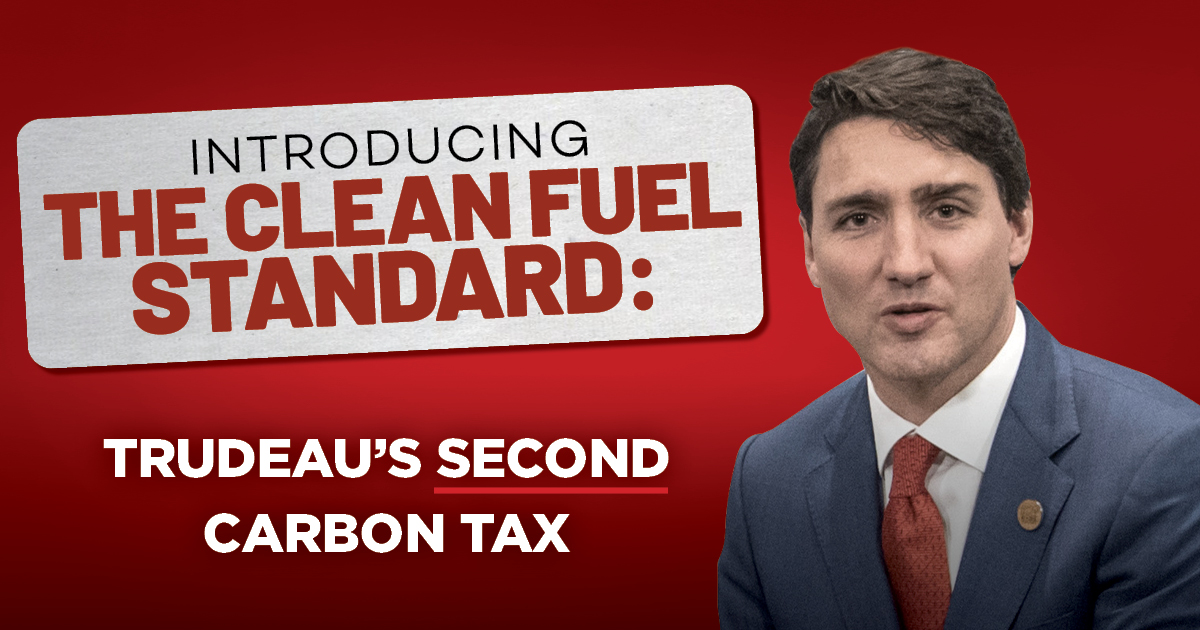 Last week, the Trudeau/Singh government continued its campaign to raise gas prices. The April 1st , 2022 Carbon Tax Increase was not enough for them. This month, they are finding new ways to crank up the price you pay at the pump. Specifically, this new approach is through new Clean Fuel Regulations, also known as the “Clean Fuel Standard” or “CFS”, for short.

I have been warning the public about the CFS - or "Second Carbon Tax"; as we call it - for 2 years. In 2020, when the CFS was first proposed, Canadians for Affordable Energy commissioned a report outlining the significant costs posed and the negligible environmental pay-offs offered by what then “proposed” CFS. The CFS was, and is still, projected to permanently raise gas prices by an amount equivalent to Trudeau’s first carbon tax. However, unlike the first carbon tax, the CFS can be imposed on taxpayers without having to be approved by parliament: as a regulation, it falls under existing law (the Canadian Environmental Protection Act in this case) and so the CFS doesn't require parliamentary debate. More significantly for Trudeau/Singh and co., this means it doesn't get much attention.

But I believe it deserves attention: the CFS is being imposed when Canadians are facing record costs at the pump is outrageous. The government’s own impact assessment released along with the regulation points out that “the regulation will increase production costs for primary suppliers, which will increase prices for households and industrial users.” That’s right – they admit it.

The current Liberal / NDP cabal is, right out of the gate, pleading “guilty” to raising the price of Canadian energy.

Perhaps recognizing that this additional cost would make him unpopular with Canadians, Trudeau did not even tweet about his Second Carbon Tax when it was announced. When his Minister of Environment and Climate Change Steven Guilbeault did eventually tweet the announcement, Trudeau was not even in the country. This flippancy from Minister Guilbeault and the Prime Minister towards a significant additional cost for Canadians should not surprise us. The government is too invested in its lofty global climate agenda to worry about whether Canadians can afford to fill their tanks or buy food.

If Trudeau and co.– and let’s not forget his new partner, Jagmeet Singh - were interested in the negative effects of the CFS then the fact that it will cost Canadians an average of $220 per year by 2030 would cause them to pause and reconsider. By 2030, the CFS will raise gas prices by between 13 and 20 cents per litre. In the same year, the carbon tax is projected to reach $170/ton - an additional 40 cents per litre at the pump. The CFS will also add a tax to diesel. Diesel fuels the transportation industry and when diesel prices prices go up, so does the cost of all goods.

The impact assessment released alongside the CFS makes it abundantly clear that this second carbon tax will shrink our economy and will cost Canadian households a great deal. Our own report showed that the CFS will not achieve its stated objectives and may even cause damage to the environment.

The government must stop punishing Canadians with costly taxes and regulations. Canadian families and businesses are struggling with high costs as it is. They need policies that will reduce prices, not policies that will increase prices for the sake of a climate ideology. The CFS should be canceled before it adds even more pain for Canadians.