A Just Transition Part Two: David Suzuki – Will anyone call him out for suggesting violence? 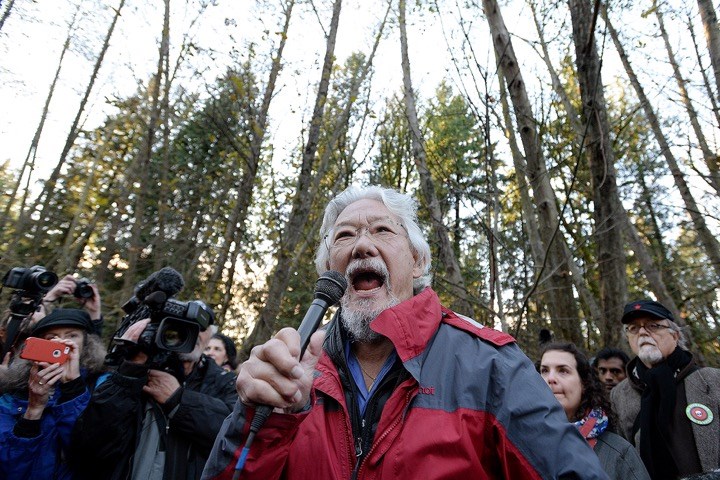 You’ve heard of “the great reset” and probably even “net zero by 2050”.  Another buzzword or phrase that is floating around these days is “just transition”.  What is this?

A “just transition” is the euphemism the green ideologues use to describe their plan to make your life more expensive, take away affordable energy, and continue the subsidized boondoggle that is gradually undermining Canada’s economic competitiveness.

But these ideologues – like extremists everywhere – couch their language in terms that suggest something better, something “not harmful,” but beneficial.

Their buzzwords are usually oh-so-very-clever - until they slip up.

These slipups are usually worthy of derision, like Boris Johnson’s bumbling attempt to justify a private jet back to London from the COP26 meeting in Glasgow instead of the very accessible high-speed train, or Justin Trudeau’s electric Jaguar trip to the same meeting so he could tell others how they need to change their lives and better manage resources.

But the slip ups just got a lot more serious – and troubling.

High profile Canadian environmentalist David Suzuki spoke at a protest in Victoria the other day, and said Canadians are in “deep doodoo” if more action isn’t taken on climate change. Then he got, ummm, a bit “carried away” and stated that “the next stage after this is there are going to be pipelines blown up if our leaders don’t pay attention to what’s going on”. Here’s the link if you didn’t see it. [ 'Pipelines will be blown up,' says David Suzuki, if leaders don't act on climate change (msn.com)]

What did he just say? Did Suzuki just say “pipelines will be blown up”?

Yes indeed he did.

Did he promise to be the one to blow up the pipelines? No. But he did say it could happen. Does he know something that we don’t know?

Did Suzuki overhear something at some green energy garden party? Is he willing to “name names” – at least will he share his secret knowledge with the police?

Otherwise, it can be argued that Suzuki is coming very close to condoning violence that could threaten something all Canadians need – access to safe, clean affordable energy.

David Suzuki’s comments suggest he doesn’t care about these needs however, and his suggestion about might happen  is made with a certain cold-bloodedness that makes one wonder what Suzuki really thinks about the value of all this secure energy, and of the Canadians who rely upon it.

Certainly, many will argue that Suzuki’s behaviour is beneath the expected conduct of a public figure – will the CBC remove him from their programming?

This is a man who the Prime Minister likes to call upon for advice – will the PM distance himself from the statements?

This is a man countless industry figures like to support financially – will Canadian industry stop supporting this kind of rhetoric?

Environmental advocates are using increasingly radical language to force action on their so-called “just transition” agenda – revealing just how warped their thinking is. The highest profile environmentalist in Canada just showed his leadership on that agenda.

Suzuki’s foundation calls for the Government of Canada to enact “just transition” legislation to support workers and communities affected by the clean energy economy transition. Here at CAE we’re not sure what that means, but when the man after whom the foundation is named seems to be issuing veiled threats about what could happen if the so-called just transition isn’t enacted, we should all be very disturbed.

Why? Because what he seems to be saying is “enact what I say you should enact or someone out there might blow up a pipeline – wink, wink”.   Is he saying, in other words, there will be “justice” – a “just transition” to a green energy world, one way or another, either through means that are legal, or through violence?

I usually end these posts with a reference to affordability – let me say here, we in Canada can’t afford to let the kind of dangerous statement David Suzuki made go unanswered. We should all demand that Canadian leaders speak out about it.