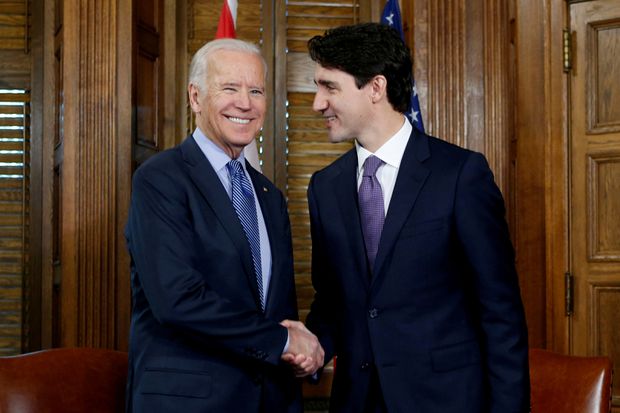 On January 20, 2021, which was Inauguration Day in the United States, the Keystone pipeline finally died.

Keystone, one of the most sophisticated, innovative, job-creating, economy-stimulating, aboriginal-engaging, infrastructure projects in North America, was cancelled by the new U.S. President Joe Biden.

The cancellation came even after the project’s proponent, TC Energy, threw in a promise of an extra $1.7-billion worth of environmental benefits over and above the core value already delivered by the project.

Biden’s decision shows that the epidemic of energy policy madness is not limited to Canada. It has, post Trump, spread across to our biggest trading partner as well. The response from Canada’s Environment and Climate Change Minister, Jonathan Wilkinson, to Biden’s decision was appalling.

Minister Wilkinson said that he wasn’t going to dwell on this particular decision about a pipeline, but instead would focus on the new climate ally we have. Incredibly, he took the view that the new U.S. administration “offered a welcome dose of climate optimism.”

Think about this, fellow Canadians. Climate optimism for Jonathan Wilkinson means having someone in charge of the biggest economy in the world ranting about a “climate crisis” just like Justin Trudeau does, while ignoring the real crisis.

And what is the real crisis? It is the disaster of ideologically-driven environmental policy that raises the cost of living and kills jobs.

Don’t believe it? Well, talk to any of the 1,000 Canadians who were just laid off in immediate response to the announcement of the cancellation of Keystone.

Canadian resource companies need to take note. Your customers are watching you trip over yourselves to show your green credentials and as you boast about your commitment to meet globally-imposed emission reduction targets such as the Paris Accord’s 30% reductions by 2030 target, or Canada’s “net-zero emissions by 2050” commitment.

Corporate Canada’s pandering to the leftist Trudeau agenda is, to say the least, counter-productive.

If you are in the resource sector – particularly the oil and gas sector – you need to realize that the Trudeau government and their friends simply do not want your sector to exist. Everyone knows this. Stop pretending that you do not know this!

The question is, do you even want your sector to exist? Do you acknowledge the value of delivering affordable reliable goods and services to Canadians?

If you do, then here are a few pieces of advice.

First, focus on what you do really, really well: get energy and other resources to Canadians affordably, reliably, and in a manner that reflects the kind of continuous improvement on environmental performance you are known for. And emphasize these points in your public communications, and your engagement with our elected representatives.

Second, while you do that, resist the temptation to use the rhetoric of the green leftists in charge of the Government of Canada. In other words, do not talk about a climate crisis (there is not one), don’t make absurd commitments to arbitrary targets to 2030 or 2050 (they can’t be met without shutting down the economy), and don’t promote so-called solutions (like wind and solar) as though they are realistic alternatives (they are not reliable, they are not affordable, they are not sustainable). Parroting this ideological green rhetoric is misleading and hurts Canadians.

Third, stand up for everyday Canadians who have been beaten down by high prices and interventionist governments and be a voice for their interests instead of the interests of environmental activists, their government friends, and the investment community sharks who feast off the green largesse of the taxpayer.

Prime Minister Trudeau and President Biden will speak this week, and will no doubt try to gloss over the Keystone cancellation. The President will no doubt say how important the relationship is with Canada, the Prime Minister will nod vigorously, and they will both sound solemn on issues like climate and the lockdowns.

But that exchange will be meaningless political theatre. The Biden Administration’s action on Keystone should be a wake-up call for the entire resource sector – it shows that Canada doesn’t matter to the U.S., and Justin Trudeau and his minions like Jonathan Wilkinson aren’t capable of changing that current reality. Even if they wanted to change, they wouldn’t.

This is a high stakes game played by global powers. Canada is not a spectator in this game - in fact, we are the ball getting thrown around. It doesn’t have to be this way, but talking green will only make it worse.