Next on the Clean Fuel Standard hit list: Ontario 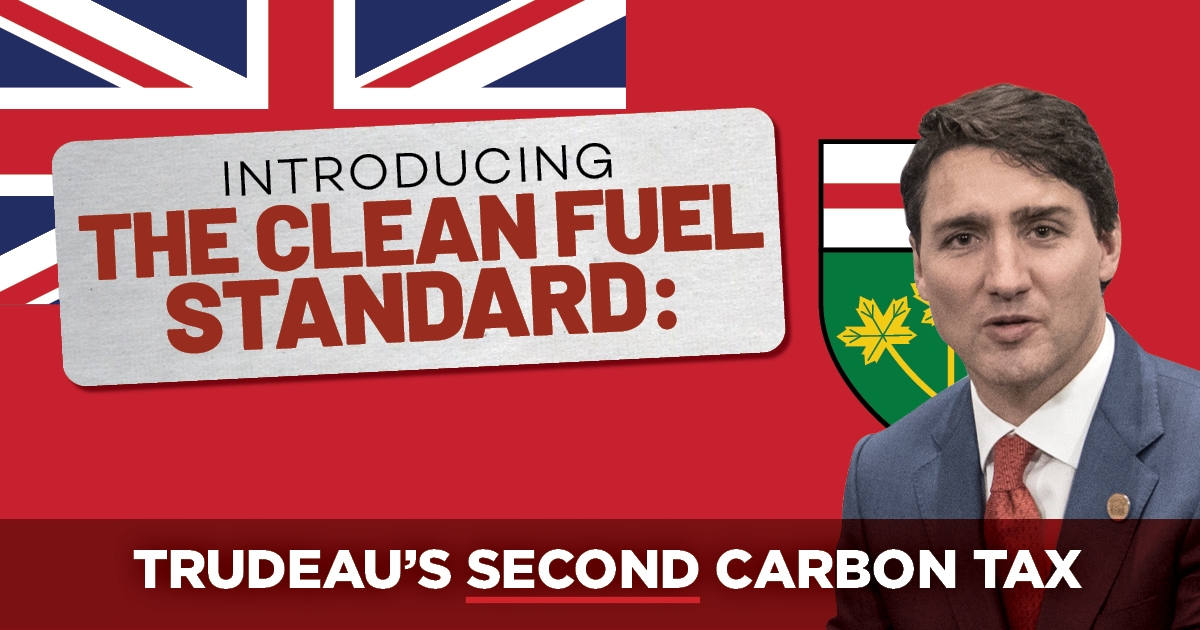 Justin Trudeau’s new tax, the Clean Fuel Standard, is on its way.

Known as the “CFS” for short, this new tax is, in effect, Justin Trudeau’s second carbon tax, but disguised under a sneaky new name.

This past September, Canadians for Affordable Energy (CAE) commissioned a report from economics firm LFX Associates on the implications of this new carbon tax.

A few weeks ago, I wrote about the financial and economic implications the CFS would have on Newfoundland and Labrador. Today I will explore another of the report’s provincial case studies - Ontario.

In Ontario, like in much of the country, jobs are concentrated in a small number of large cities, and many commute to work from surrounding areas (well, at least they did, before the pandemic). For many residents of Ontario, the most populated Canadian province, rising house prices in major cities have caused families to settle in a number of smaller, more remote suburbs. As people move into more rural areas, they require their cars more. Transportation fuels - like gasoline - are essential to Ontarians as well as most Canadians.

CAE’s Assessment estimates that of the 17% increase in production costs for those transportation fuels caused by the CFS, about 10.1% would be passed on to consumers in Ontario. That means a 10.1% price increase in addition to the federal government’s $30/tonne carbon tax. When will the fuel taxes end?

This new carbon tax, the CFS, does not stop at transportation costs.

For Ontarians, 67% of whom heat their homes with natural gas, winters will also be getting more expensive thanks to Trudeau’s second carbon tax. The average household in Ontario spent $362 on natural gas in 2019. Under the CFS, the same volume of gas purchase would have cost $376, or 4% more every year (again, in addition to the existing carbon tax).

And meanwhile the Liberals are quietly changing building codes to make housing stock greener, which will add further costs. These moves represent hit after hit after hit for the consumer.

If you are a small business owner, particularly a restaurant, the situation is really bad. Those restaurant owners fortunate enough to survive the COVID-19 lockdown should expect an additional cost of about $500 per year on fuel. Now, they may try to reduce fuel costs by reducing appliance use, or cutting hours - but that reduces their opportunity for profit. In an industry barely able to open at full capacity for months and months in 2020 due to lockdowns, how can they bear another hit? But a hit is what the CFS will be.

The Trudeau government claims that as a result of the CFS there will be reduced consumption of fossil fuel produced energy. But let’s note that this is the first disastrous objective of all carbon taxes – to “reduce consumption” invariably means to reduce economic activity, and prosperity.

In Ontario, energy prices are already high. Hydro costs have continued to increase (read more about this in our previous blog post here). Ontarians cannot afford the additional costs posed by the Clean Fuel Standard. Your home, your car, your business - all will suffer under the burden of Trudeau’s second carbon tax.