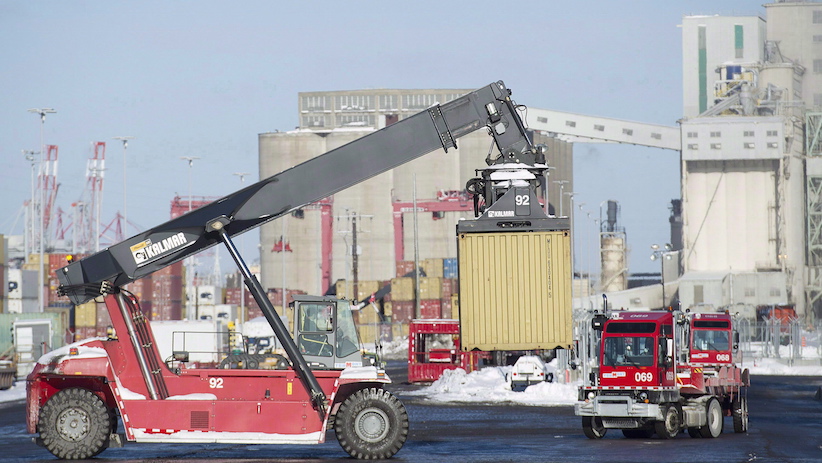 John Williamson writing for MACLEAN'S on the Trudeau Government's contradictory policy mismatch on trade and carbon pricing: Prime Minister Justin Trudeau’s carbon pricing tax plan will increase the cost of Canadian made goods and – incredibly – make U.S. goods sold in Canada less expensive. It's a tax on Canada's manufacturing sector and a tax on Canadian workers.

The overarching priority for Prime Minister Justin Trudeau when he met with United States President Donald Trump in Washington, D.C. this week was to keep trade flowing across the 49th parallel. Access to the U.S. market is critical to the wellbeing of the Canadian economy. The Prime Minister’s diplomacy paid off.  Trump said he plans to merely tweak the Canada-U.S. trade arrangement and called our shared economic relationship “outstanding.”

Tariff-free trade has indeed been very good for both nations. Today, our two countries exchange more than $2-billion in goods and services each day. The Prime Minister’s unwavering support for free trade is thus to be commended. But the economic benefits of all this tariff-free trade for Canadian workers—particularly those in manufacturing—is threatened by his determination to put a price on carbon.

Mr. Trudeau’s carbon pricing tax plan will increase the cost of Canadian made goods. That’s the impact of any tax. What should alarm Canadian companies is how our trade interests will be harmed by carbon prices. Putting a price on carbon in a global economy is equivalent to putting a brand new tariff on Canadian products.

Tariffs are normally used by governments to make imports more expensive and give domestic firms a cost advantage. Trudeau’s tax plan flips this sort of protectionism on its head by handing foreign companies a price advantage. Carbon pricing puts foreign workers ahead of Canadian workers.

Slapping a carbon levy on Canadian goods weakens the ability of Canadians to compete. But the price disadvantage won’t just hurt export sales to the U.S. and other countries. The carbon tax—along with its ugly cap-and-trade sibling—will hit most Canadian products whether those goods are sold at home or abroad. Because imports aren’t subject to the carbon tax, foreign goods sold in Canada will be less costly than similar domestic products.

Proponents of carbon pricing insist there are three mechanisms available to resolve these damaging trade distortions caused by carbon pricing.

Handing out “free” carbon allocations to export businesses is meant to compensate for these new costs. But this won’t stop the damage. In Ontario—Canada’s manufacturing heartland—carbon credits will mostly go to large firms well versed in high stakes lobbying. But thousands of small- and medium-sized companies will be shut out. The Coalition of Concerned Manufacturers of Ontario says carbon pricing means job losses because it will force some companies to move to the U.S. to compete or shutter operations altogether.

Alternatively, carbon tax advocates put their faith in a lower Canadian dollar. But a weaker loonie is a crude solution since it would apply equally to all sectors. It cannot adequately shield a high-energy user in Canada from foreign competitors since the dollar’s adjusted equilibrium value reflects Canada’s overall trade balance and not that of any particular industry.

It’s a fool’s game to try to predict the future value of the loonie, especially when foreign exchange rates are influenced by many external factors. The Canadian dollar could be worth less under a carbon tax regime or it could be worth more. Who knows?  Prudent policymakers shouldn’t be risking Canada’s manufacturing sector on a foreign exchange bet.

The final rescue plan for Canadian jobs offered up by carbon price enthusiasts is the creation of a border carbon adjustment scheme. This would apply a tariff levy on goods from nations that don’t tax carbon. It’s meant to protect Canada’s competitiveness and punish free-riding by other countries and is offered as path to prevent Canadian job losses should China or the U.S. refuse to tax carbon emissions.

But determining the carbon content of goods coming into Canada will be all but impossible if other nations choose not to participate. Plus, this will be a cure far worse than the disease. It would thicken our border with bureaucracy and upend Canada’s commitment to tariff-free trade.

Imagine how the White House and Congress will react if Canada slaps a carbon tariff on U.S. exports. Canada would be declaring a trade war with a President itching to put America first.

To protect Canadian interests and jobs, the Prime Minister will either have to convince the Trump Administration to tax U.S. carbon at roughly the same rate as Canada (good luck with that) or abandon his own carbon taxing plan in the interest of defending Canadian jobs.

Earlier this week the Prime Minister said it is a shared Canada-U.S. goal to remove barriers to trade.  President Trump agreed. Now Prime Minister Trudeau needs to heed his own advice.