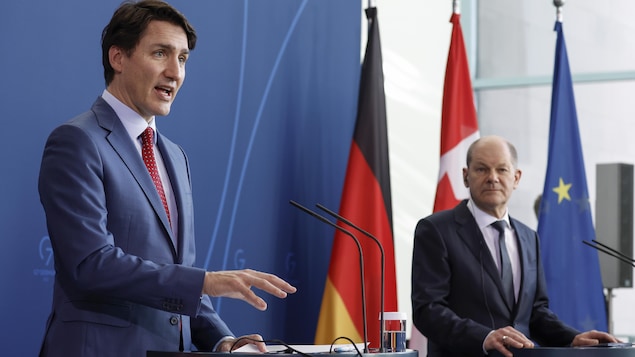 German Chancellor Olaf Scholz was in Canada last week, meeting with Canadian PM Justin Trudeau to discuss Europe’s ever worsening energy crisis. And the situation in Europe, including Germany, is serious indeed.

When Russia invaded Ukraine, Chancellor Scholz cancelled the planned Nord Stream 2 gas pipeline, a pipeline designed to move natural gas from Russia to Germany.  By July, the already existing Russia-to-Germany Nord Stream 1’s supply to Germany was cut by 80 percent. A few days ago, it was shut down altogether by Russia, and meanwhile that country is flaring huge volumes of gas that could be going to hungry markets.

Like many European countries, Germany made itself dependent on Russian gas exports. Almost 30 percent of German energy comes from natural gas; prior to the recent war over half of that natural gas was coming from Russia. This precarious arrangement was a direct consequence of the extreme green agenda of successive German governments. The Germans are blaming Russia, but to a certain extent, this is a “Made in Germany,” self-inflicted crisis.

An economy based on “renewable energy” was always just around the corner, politicians claimed, and not just in Germany. After decades of wishful thinking and tens of billions sunk in “renewable” solar and wind power, it hasn’t happened. Not in Germany. Not anywhere.

Because of these utopian extreme green fantasies, European energy prices are now expected to rise by 25 percent on average. Recent events suggest the increases may end up being much, much higher. There will be more energy shortages and rationing, and the German economy may well enter a severe recession in winter – unless, perhaps, Russia decides to turn the taps on again.

Scholz recently told the public not to worry. If businesses and households cut their energy use by 20 percent, the country has “a really good chance of making it through the winter”.

That’s the plan? Cold, rationing, and economic hardship in exchange for a chance of simply surviving the winter? Meanwhile, Germany is reactivating its coal plants in a desperate scramble to make up for all that Russian gas. And individual Germans are scrambling to make sure they have energy this winter – wood for wood fires is apparently almost impossible to find as German homes and communities are trying to stockpile it.

To his credit, Scholz may be slowly coming to grips with reality. Interviewed on CBC at the end of his Canadian visit, he said he’d “really like” more Canadian natural gas. Germany is “building ports, at many places, for importing gas, liquid natural gas, and this will really make a difference”.

But it probably won’t, because Trudeau won’t allow it. He promises to help Germany by doubling down on the same foolish policies for Canada that caused the energy crisis in Europe.

According to his official statement on the German Chancellor’s visit, Canada and Germany will work together to “accelerate the global transition to clean energy” through “strong climate action”. That’s right: accelerate the same never-ending “transition” that already threatens to devastate Germany and much of western Europe.

Suddenly discovering the language of capitalism and the free market, Trudeau noted the lack of a “strong business case” for Germany’s request for help.  Canada doesn’t have export terminals or pipelines, after all. (I wonder why that might be? No one asked him.) Besides, the Germans won’t be needing gas in a few years anyway; they’ll be getting their energy from “renewables” once their “transition” is done.

So instead, in what Trudeau called a “historic” moment, the two leaders signed a “declaration of joint intent” to invest in “green” hydrogen and create the infrastructure needed for us to ship it to Germany.

Let’s think about that for a moment.

Indeed, there’s clearly no “strong business case” for any renewable energy projects, including “green hydrogen”. Which is why the entire renewable sector depends on enormous government subsidies. And “green hydrogen” is little more than a pipe dream: the amount of energy required to produce it, the systems required to support it, and the cost of all of this is extraordinarily large.

Trudeau and Scholz signed their “agreement” in Stephenville, Newfoundland where – sometime in 2025, if all goes well – wind power will be used to produce hydrogen for export. But the infrastructure for making and exporting hydrogen doesn’t exist, and it will be far more expensive than traditional natural gas.

Even the CBC reported that Canada’s current production of hydrogen is negligible, and that “almost all of it is ’grey’ hydrogen, a dirtier form that produces roughly double the emissions of natural gas”.

It’s absurd – and it’s a fantasy frankly – to pretend that this fledgling industry can do anything to help Germans desperately in need affordable energy right now.

It was a historic moment, though, with both leaders proud of their deal, as if to claim they have achieved “green energy in our time” or something like that. As the National Post noted, just one ocean port exporting liquid natural gas to Europe from Canada could be adding 250 million dollars per day to our country’s GDP. Many projects to do just this have been proposed over the years, but we have none of any significance in operation yet. That’s mainly because our federal and provincial governments have crippled the sector with maddeningly complicated regulation.

Trudeau has been repeating the same vapid slogans since the start of the Russia-Ukraine war. Back in the spring of this year he promised to “be there” for Europeans as the world “moves away” from fossil fuels. What does that even mean? Now he promises energy we don’t produce, using a multi-billion dollar infrastructure that doesn’t exist, from a planned facility that doesn’t even have regulatory approval.

Cold comfort for Germans going without light and heat this winter.

The German energy crisis is partially a consequence of Germany’s principled support for Ukraine in the current war, but it is also the result of profoundly foolish energy German policies. Canada’s impotence is the result of equally foolish Canadian policies. German politicians whine that Putin is “weaponizing” energy. What did they expect? Having a taken side in a war, against Russia, though without actually going to war,  they complain that Russia is now the  using economic weapons against them –weapons they themselves forged.

Likewise, Canada has deliberately hobbled its own fossil fuel sector. Had our own political class not wanted to “move away” from our vast, largely untapped resources, had they not deliberately crippled our natural gas industry, we could offer real help to Germany.

For now, both leaders will keep on pretending to be doing something and ordinary people in Germany, and much of the world, will pay a high price.