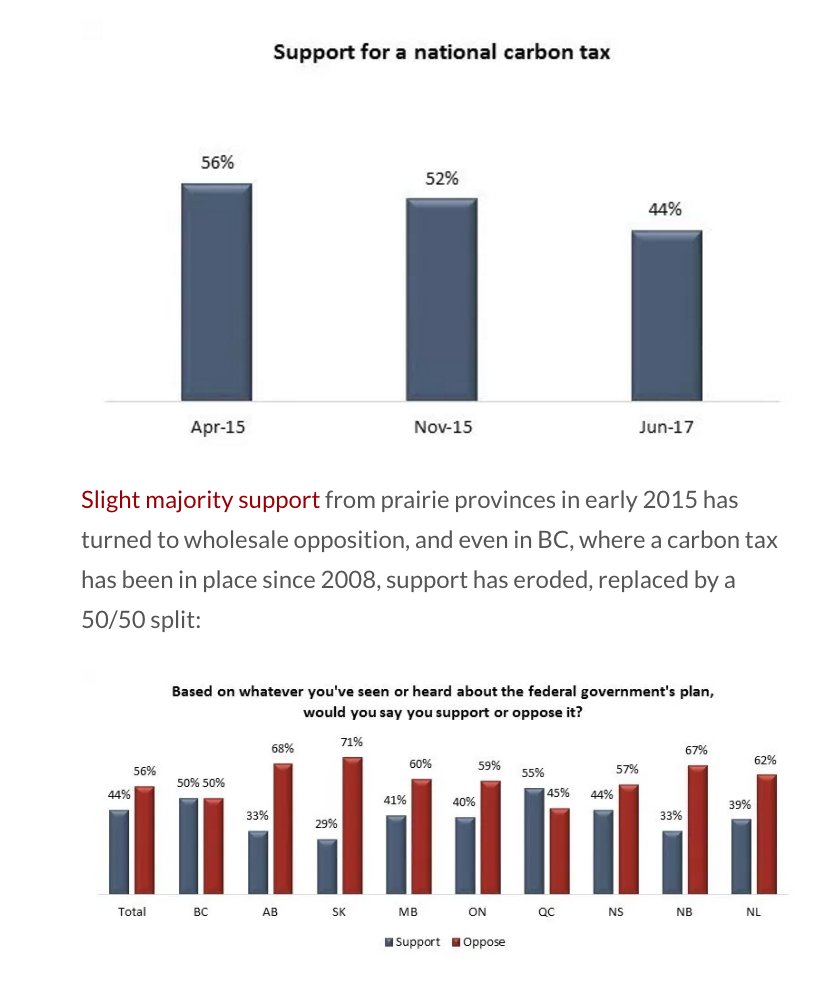 The new study by the Angus Reid Institute suggests support for a national carbon tax has fallen to 44% from 52% last November, and 56% two years ago, and 55% of believe Canada should hold off on carbon pricing to avoid being placed at a competitive disadvantage. - National Post

The biggest risk to the oil industry: time

The Great Canadian Pipeline Battle has been long, costly and painful, pitting capitalists against environmentalists against politicians against First Nations. Not long ago, there were signs of détente along the path to vastly expanded oil shipments from the West Coast. But lately, they’ve fallen away again with a new, anti-pipeline government in British Columbia. Now, with Year 4 of languishing crude prices coming into view, the economic promise may be diminishing. - Globe & Mail

Dutch lender ING Groep NV has said it would not finance any of Canada's major pipeline projects, including TransCanada Corp's Keystone XL and Energy East and Enbridge Inc's Line 3, after pressure from activists. The move came after ING earlier this month publicly disavowed Kinder Morgan Canada Ltd's KML.TO Trans Mountain expansion project, but did not name any other Canadian projects. While ING has a policy of not financing the extraction of oil sands globally, it had been unclear whether that included the Canadian pipelines. ING said it wanted to clarify its position after being targeted in June by activists who asked the bank to back away from Trans Mountain. - Reuters Canada

What about photosynthesis? Ontario greenhouses are getting charged for carbon their plants consume

Ottawa pitches plan to keep National Energy Board in Calgary

After a series of perceived insults against Alberta and its oilpatch from Ottawa, the governing Liberals appear to have avoided another dust-up by proposing to keep the National Energy Board in Calgary. An expert panel on modernizing the regulator had riled political and business leaders in Alberta with a recommendation to move parts of the National Energy Board (NEB) to Ottawa. The panel, which didn’t hold public engagement sessions in Calgary, cited criticisms that having the NEB headquartered in the city sets the stage for “undue influence” and could “erode” the regulator’s independence. The federal government appears to have rejected the recommendation. - Calgary Herald

City council has unanimously supported the TransformTO climate plan to transition Toronto to a low-carbon city by 2050, but the fight for greenhouse gas reductions isn’t over yet. It remains unclear whether council will agree to fund fully the ambitious action plan’s recommended $6.7-million budget for 2018, after voting to support a motion that called for business case analyses of the various recommended actions. TransformTO aims to reduce the city’s greenhouse gas emissions by 80% below 1990 levels by 2050, with an interim target of 65% reductions by 2030.  - Toronto Star

Ahead of this week's G-20 Summit in Germany a group of political figureheads from around the world has urged the G-20 to reassert its support for the "implementation of the Paris Agreement and further action on climate change." In a statement on Wednesday the governors, ministers and premiers of Baden-Württemberg, California, South Australia and Catalonia – members of the Under2 Coalition – called on world leaders to "recognize the role of sub-national governments, states, regions, cities, in leading and delivering on climate action." The Under2 coalition is made up of 176 cities, states and countries all committed to limiting greenhouse gas emissions to two tons per capita or 80 to 95% below 1990 levels by the year 2050. - CNBC

While some investors may be optimistic on Tesla's Model 3 production plans, Goldman Sachs is concerned over slowing sales growth of the company's current electric cars. - CNBC

Qatar Petroleum on Wednesday announced plans to significantly raise natural gas production in the coming years, creating an obstacle to President Donald Trump's goal of "energy dominance." The move threatens to add to a projected glut of liquefied natural gas, or LNG, as a wave of new projects come online in the coming years, including from the United States. - CNBC

Could China, the world's largest automobile market, help address the threat of global warming if it went completely electric? The answer isn’t as obvious as it seems. China has been making great strides toward electrification. Electric vehicle sales are booming: Consumers bought more than 300,000 last year, and more than 5-million are expected to be on the road by 2020. Encouraging as that may be, though, the move away from conventional cars and trucks won’t immediately reduce the country’s carbon emissions. On the contrary, the production and exploitation of electric vehicles in China actually produces more greenhouse gases and consumes more overall energy. - Bloomberg

Former federal resources minister Ian Macfarlane said he was confident up to three next-generation coal-fired power stations would be built along the east coast of Australia to replace older power plants when they retire over the next decade. Mr. Macfarlane, who is now Queensland Resources Council chief executive officer, said he would be "more than happy" for the high-efficiency, low-emissions, coal-fired power plants to receive taxpayer-funded money if it was needed to get them across the line. - Australian Free Press

Qatar just undermined Australia's efforts to overtake it as the world's biggest producer of liquefied natural gas. While the Gulf sheikhdom may soon slip to second place behind Australia as top supplier of the fuel, it's poised to retain the number one spot within the next seven years after Qatar Petroleum said it will raise output by 30%. - Australian Free Press

Photon Energy has started the development of a 316MW solar power plant near Gunning in the state of New South Wales (NSW), Australia. When completed, it is claimed to become the largest planned solar power plant in the country. About 590 hectares of land will be utilised in the solar plant’s construction. - Clean Technology Business News