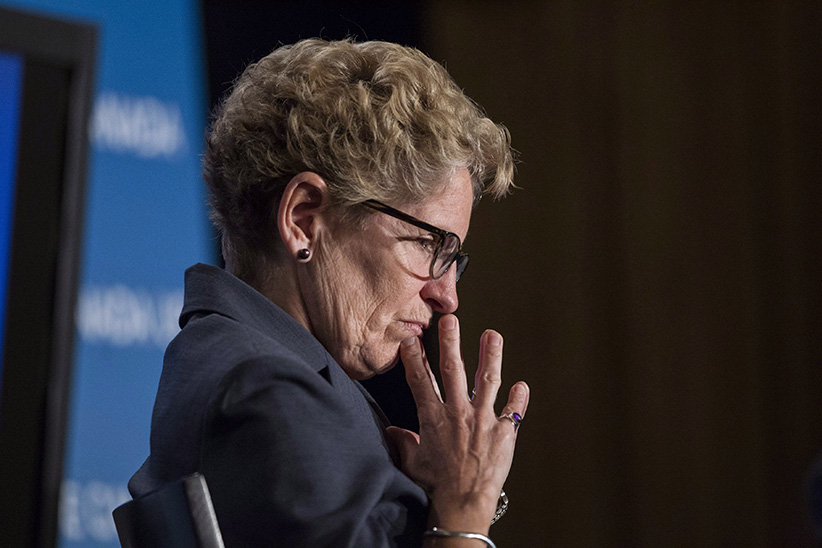 Ontario’s financial watchdog is sounding the alarm over the Liberal government’s 25-per-cent cut in residential electricity rates. Auditor general Bonnie Lysyk estimates the scheme, unveiled last May, could cost Ontarians an additional $4-billion in interest charges over the next 30 years. In Lysyk’s latest salvo against the provincial government in her ongoing accounting dispute with Queen’s Park, she expressed outrage at how the hydro rebate will appear on the books. “The accounting proposed by the government is wrong,” said the auditor general, decrying the use of U.S. accounting standards that enable the Liberals to bankroll the rate cut through the new government-owned OPG Trust. Because the trust will have to borrow money at a higher interest rate than the province pays, Lysyk estimated there will be an extra $4 billion in charges over 30 years for a total of $39.4-billion. But that is not reflected on the provincial treasury’s annual bottom line because electricity ratepayers, not taxpayers, will cover the tab. - The Toronto Star

Auditor General Bonnie Lysyk gave Ontarians a depressing glimpse of their financial future Tuesday in her report condemning Premier Kathleen Wynne’s financing of her so-called “Fair Hydro Plan.” That future is one of never-ending debt, in which Wynne’s Liberal government, already the most indebted sub-sovereign borrower in the world, will continue to drive us deeper and deeper into the red, year after year. Lysyk’s report revealed the Liberals don’t care about that, as long as they can portray the provincial budget as balanced through accounting tricks that hide the true costs from taxpayers and hydro ratepayers. In this case, instead of directly borrowing the money necessary to subsidize hydro rates by 25% for four years, the Wynne government will do it through entities like Ontario Power Generation, which will have to pay as much as $4-billion in higher interest costs over three decades as a result. - Toronto Sun

Last week TransCanada Corporation, a major North American energy company, pulled the plug on Energy East — its 1.1-million-barrel-per-day oil pipeline between Alberta and New Brunswick — after the company said it would conduct a “careful review” of the cost impacts of the National Energy Board’s changing regulations. It was the latest hit in a chain of bad news for Canada’s energy industry, and further evidence that Canada’s growing regulatory barriers may be damaging our investment climate. - Edmonton Journal

TransCanada’s withdrawal of its proposal to build the Energy East and Eastern Mainline oil pipelines is a huge loss to Canada and Canadian workers — a $16-billion project regulated to death. The straw that likely broke the camel’s back was the National Energy Board (NEB) announcing it would add an “upstream/downstream” emission test to its project reviews. These cancelled pipeline projects, to supply eastern Canadians with domestic — rather than imported — oil (while also weakening the U.S. monopoly on Canadian imports), should have been an absolute win-win project for Canada. The Energy East pipeline would have carried 1.1 million barrels per day of Canadian oil eastward to Canadians at lower cost while increasing self-reliance. Even if much of the pipeline’s oil was exported, it would still be an economic benefit for Canada with foreign market access that would allow for greater diversity of Canada’s customer base for its oil. - BOE Report

As a dyed-in-the-wool conservative, Brad Wall is hardwired to oppose anything Liberal — especially anything Trudeau Liberal. Many have simply written off Wall’s criticism of the Energy East pipeline cancellation and the role he says Prime Minister Justin Trudeau’s Liberal government played in the decision as pure partisan politics. Armed with arguments on Energy East’s economic viability, detractors of both Wall and Regina-based federal Conservative Opposition Leader Andrew Scheer have been particularly quick to latch on to this notion. But those who have known Wall will recognize how the notion of a national pipeline and the frustration over its cancellation go beyond the hardwired politics to his core beliefs as a western conservative. - Regina Leader Post

When federal Energy Minister Jim Carr opened the Trudeau government’s two-day Generation Energy Forum in Winnipeg last week, there was no room for laughs, at least not intentional ones. About 80 speakers were crammed into about eight hours of working time. Day Two allocated about five working hours to 40 more speakers piled up in concurrent and separate sessions, including a “Ministerial Panel” in which eight federal and provincial cabinet members droned through an hour of collaborative self-congratulation as they explored the topic “Driving the Energy Transition Through Pan-Canadian Collaboration.” As to where Pan-Canada is going on energy and how it’s going to get there and who’s involved and what’s at stake, some disturbingly far-out themes were outlined in the opening “stage-setting” session. - National Post

The head of the Federal Energy Regulatory Commission (FERC) said on Tuesday that a directive from the U.S. energy secretary to prop up struggling nuclear and coal power plants has initiated an important conversation, but hinted the agency may not pass the plan without changes. Late last month, U.S. Energy Secretary Rick Perry directed FERC, an independent agency, to pass a rule within 60 days that would allow certain coal and nuclear plants that store 90 days of fuel on site to recover full costs through regulated pricing, saying the plan increases reliability of the nation’s power grid. “There’s real value in Secretary Perry initiating a conversation” on whether FERC adequately compensates certain power generators for their contributions to reliability, FERC Chairman Neil Chatterjee told an energy conference in Washington on Tuesday. - Standard Republic

Coal and gas will remain a bigger part of the nation's energy mix under the Turnbull government's new National Energy Guarantee than under the Finkel Review's Clean Energy Target. With Prime Minister Malcolm Turnbull and Energy Minister Josh Frydenberg under pressure from their own party over the future of coal, the new energy plan will help ensure the life of existing coal-fired power stations is extended. Although there has yet to be formal modelling of the recommendations from the Energy Security Board, it estimates that coal and gas will form between 64 and 72% of the generation mix in 2030. This compares to 58% under the Finkel plan to meet the national emissions target of 28% by 2030, and 39% for Labor's emissions target of 45%, according to figures released by the Turnbull government. - Australian Financial Review

Katharina Zinnecker’s farm in the foothills of the German Alps has been in the family since 1699. But to squeeze a living from it today, she and her husband need to do more than sell the milk from their herd of cows. So they carpeted the roofs of their farm buildings with solar panels. And thanks to hefty government guarantees, what they earn from selling electricity is “safe money, not like cows,” Ms. Zinnecker said. The farm has been a beneficiary of “Energiewende,” the German word for energy transition. Over the past two decades, Germany has focused its political will and treasure on a world-leading effort to wean its powerful economy off the traditional energy sources blamed for climate change. The benefits of the program have not been universally felt, however. A de facto class system has emerged, saddling a group of have-nots with higher electricity bills that help subsidize the installation of solar panels and wind turbines elsewhere. Germany has spent an estimated 189-billion euros, or about $222-billion USD, since 2000 on renewable energy subsidies. But emissions have been stuck at roughly 2009 levels, and rose last year, as coal-fired plants fill a void left by Germany’s decision to abandon nuclear power. That has raised questions — and anger — over a program meant to make the country’s power sector greener. - The New York Times