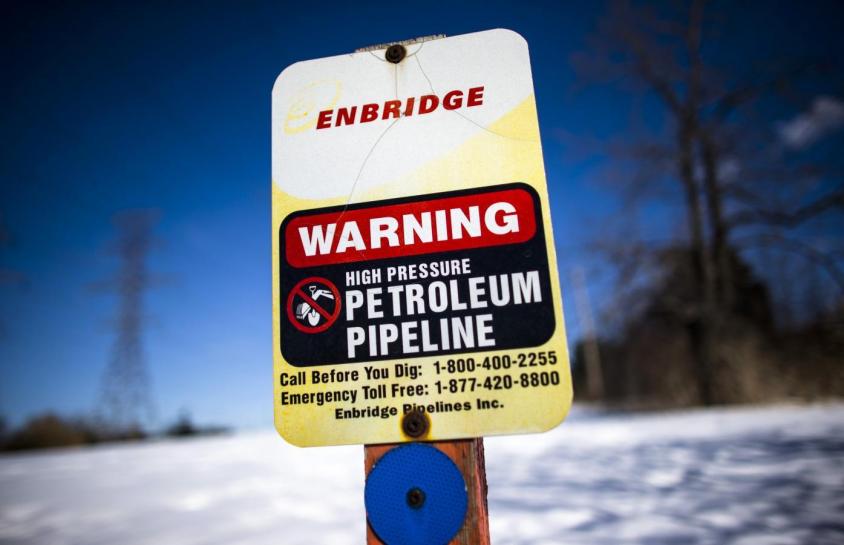 Opponents of TransCanada Corp's proposed Keystone XL oil pipeline argued on Tuesday that regulators in Nebraska had no authority to approve the line's "alternative" path through the state and that the project should be considered dead. The Nebraska Public Service Commission issued an approval for the line to pass through the state in late November, removing what appeared to be the last big regulatory obstacle for the long-delayed project, which has been backed by President Donald Trump. - CBC


B.C.'s Site C dam past the point of no return — Mike Smyth

Somewhere, Christy Clark must be laughing her head off right about now. The former Liberal premier suffered a dizzying fall from power after the election last May, but the most solemn vow she made in office came prophetically true on Monday. Premier John Horgan announced the new NDP government will complete construction of the Site C dam, the $10.7-billion behemoth on the Peace River started by Clark’s Liberals three years ago. - Edmonton Journal

A day after her government announced it would proceed with the controversial Site C hydroelectric dam, B.C.'s energy minister is addressing criticism that she broke election promises. "It's not OK to flood 80,000 hectares of agricultural land ... if we're government, then our plan is to go through the B.C. Utilities Commission and we will work to end Site C," said NDP MLA Michelle Mungall in a video from 2016, ahead of the provincial election. "Our desire is to stop the Site C dam," said Mugall who represents the Kootenay riding of Nelson-Creston in southeastern B.C. Now, as the provinces' energy minister, Mungall calls the controversial decision to proceed with the project a "very difficult" one, but says it is in the best interest of British Columbians. The NDP government on Monday decided to continue building the dam on the Peace River in northeastern B.C. – which will displace farmers and flood Indigenous lands – rather than stop work part way through the job. - CBC

From Bonavista to Vancouver Island, from the Arctic Circle to the Great Lake waters, this land really belongs to electric-power monopolies and politicians who routinely bulldoze property rights, ratepayers, taxpayers and the regulators that have become puppets of governing political string-pullers. They promised green and clean. What they deliver to Canadians instead is expensive and in the red. From coast to coast, provincial governments continue to plow ahead with power-generating mega-projects and green-power schemes whose only certain output is massive debts and soaring costs to deliver electricity that may never be needed. Newfoundlanders are saddled with Muskrat Falls, a giant dam project under construction in Labrador. Around the Great Lakes, Ontario’s electricity regime is a giant house of fiscal smoke and dirty mirrors to fund the green and clean power the province has mandated, including billion-dollar wind and solar projects that produce expensive electricity the province does not need. The same smoke and mirror structures are under construction around BC Hydro and the decision to proceed with the Site C hydro-generating project, an $11-billion dam expansion along the Peace River, 1,200 kilometres north of Vancouver. At that distance, 14 per cent of the generated power is lost in transmission. - National Post

Environment Canada says the federal government will not alter a joint statement on clean growth and climate change which suggests that natural gas is not a fossil fuel. The statement was published on Dec. 4 after Prime Minister Justin Trudeau's visit with Li Keqiang, premier of China's state council, in Beijing. It reads, in part: "The Ministerial Dialogue on Clean Energy will be chaired by Natural Resources Canada and the National Energy Administration of China. It will provide a forum to facilitate clean energy solutions, including the transition from fossil energy to cleaner fuels, such as nuclear, renewables and natural gas." The ambiguous wording indicates that natural gas is an alternative to fossil fuel energy, but according to the U.S. Energy Information Administration, natural gas, crude oil and coal are all considered fossil fuels. In emailed comments, a spokesperson for Environment and Climate Change Minister Catherine McKenna confirmed that natural gas is a fossil fuel. The representative said natural gas is "among a list of 'cleaner fuels,'" and that the joint statement would not be reworded for clarity as it has already been released. - National Observer

Whenever I travel outside the province and mention I live in Manitoba, I get asked about the cold weather. My standard response is that one gets used to it, that the kids get to play hockey outdoors, and besides, it’s always sunny. Solar energy has experienced explosive growth worldwide, with cumulative capacity exceeding 400 gigawatts (1 GW equals one billion watts) last year. The term "exponential growth" is at times overused, but in this case, it is appropriate. The installed cumulative capacity of solar energy has nearly doubled every two years over the last 20 years. - Winnipeg Free Press

A directive that local utilities like Toronto Hydro include details on the Ontario government’s 25 per cent discount on electricity bills appears increasingly political, NDP Leader Andrea Horwath says. An order-in-council on the matter was signed last June by Deputy Premier Deb Matthews – co-chair of the Liberal re-election campaign – and Energy Minister Glenn Thibeault. “It’s very obviously partisan in its nature,” Horwath said Tuesday after brandishing the two-page document in the Legislature’s daily question period. She said the directive is in effect until July 2018 – a month after the June 7 election. “Let’s agree to call these flyers what they are: desperate Liberal campaign advertising. I don’t think that’s right…what isn’t right is using public money for partisan purposes.” - Toronto Star

Climate change is affecting wind energy’s potential to provide power, diminishing a renewable energy source that scientists and policymakers are counting on to replace fossil fuels, according to two scientific studies. The world is turning more and more to renewable sources of energy – wind, solar power, and in some cases energy from flowing water – to fight climate change. But what if climate change itself alters the distribution of wind, or sunlight falling on the Earth’s surface, or river flows, and so changes or even shrinks the potential of these energy sources? The studies suggest that, at least for wind energy, that is not only happening – at least in some key locations – but that it could grow worse. “Renewables, including wind, are an important part of many nations’ and even states’ overall strategies for reducing greenhouse emissions,” said Kristopher Karnauskas, a researcher at the University of Colorado, and first author of one of the studies. “So it’s important that we fully understand how the potential efficacy of that mitigation strategy may be changing concurrently with the problem itself. We can’t assume that the baseline wind energy resource is a constant.” - National Post

A shake-up in global coal trading has delivered some oxygen to the struggling American mining industry, driving up exports to energy-hungry countries. But the relief may not last. United States coal sales abroad over the first three quarters of the year surpassed exports for all of 2016, according to government figures. Energy experts project an increase of 46 percent for the full year, adding more than $1-billion to coal companies’ revenues. Those are crucial dollars for an industry trying to stabilize itself after nearly a decade of declining prices, expanding competition from natural gas and wind and solar energy, and bankruptcies. The upturn in exports has been particularly helpful to Appalachia, where production is up 11 percent this year. Coal executives attribute the increase mostly to exports, especially of coal for making steel, known as coking coal. - New York Times

The world's largest oil consumer exported more hydrocarbons than ever before in 2017 and shows no signs of slowing down. You name it – crude oil, gasoline, diesel, propane and even liquefied natural gas – all were shipped abroad at a record pace. While the surge comes many years after the shale boom started, it can be traced straight back to the growth of horizontal drilling and fracking. U.S. exports are poised to expand even further, as the fear of peak oil supply has all but vanished just as a new demand threat emerges in the form of electric vehicles. Americans are expected to end the year pumping oil out of the ground at rates unseen since the early 1970s. More and more of it is going overseas, giving OPEC a headache as the group restrains its own output. - Petroleum World

AGL Energy has declared its intention to transform its energy supply business, detailing opportunities for major investments in gas power, hydro and eventually storage as it shifts gradually but firmly away from coal. Chief executive Andy Vesey said the tenet that the future is going to be carbon constrained is one of two strategic imperatives that govern all AGL's investments, alongside ensuring affordable energy for customers. It overrides issues such as the unresolved national policy on climate and energy, questions about commitments to the Paris climate accord and other uncertainties, he said. - Australian Financial Review

The World Bank said Tuesday it will stop virtually all lending for oil and gas projects in the developing world after 2019, sending a powerful message to global producers that financial institutions are reassessing the risks of fossil fuel development. World Bank president Jim Yong Kim made the announcement at an international climate summit being hosted by French President Emmanuel Macron to mark the second anniversary of the signing of the United Nations Paris Agreement on Climate Change, in which countries committed to limit the rise in global average temperatures to less than 2oC. The bank will make exceptions for natural gas developments in the poorest countries that need the fuel to provide access to energy for its citizens. - Globe & Mail

The European Union’s executive body says it has approved Poland’s 9.4-billion euro ($11-billion) plan for developing renewable energy sources. Heavily dependent on its coal for energy, Poland is among Europe’s top carbon dioxide gas emitters and is facing pressure and receiving incentives to shift toward clean energy sources. The European Commission said in a statement Wednesday that, while observing EU rules for state aid and competition, it has approved the Polish government’s plan for further development of renewable energy sources. It also approved a reduction of a levy put on high energy consumers who co-finance the plan. The EU Commissioner for competition policy, Margrethe Vestager, was quoted as saying that Poland’s plan will “increase the share of green energy in Poland’s energy mix and help the country’s energy transition.” - National Post