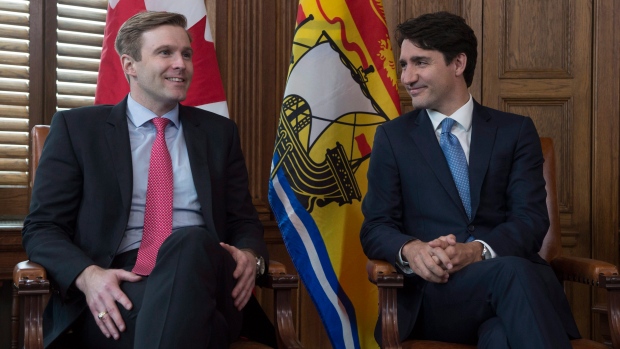 The carbon dioxide emissions tax that Ottawa will impose on New Brunswick if the Gallant government’s plan fails to satisfy the federal government’s rules will cost New Brunswickers $70-million in 2018, rising to $327-million in 2022, documents obtained by the Telegraph Journal reveal. Ottawa will impose the additional measures if a province’s system is not up to par. This will increase prices at the pump by an additional 11.63 cents in 2022. The federal government has pledged that all revenue from its carbon tax would go back to the provinces it comes from, but draft legislation released last week also gives Ottawa the ability to bypass provincial governments and give the carbon tax revenue directly to taxpayers. - Telegraph Journal

For New Brunswick, the federal government’s carbon pricing program is a solution in search of a problem: Our small province does not have a substantial enough population to produce any effect on national or global carbon emissions. The province has already met its 2020 emissions reductions targets and is ahead of schedule on its 2030 targets. The province is geographically large – it isn’t possible for people to use their cars less. And taxes are already high. An additional $70-million will be taken from New Brunswickers in 2018, and $327-million by 2022. The later number would work out to over $400 per person per year. For a family of four, an extra $1,600 in charges can make a big difference. Prime Minister Justin Trudeau and Environment Minister Catherine McKenna clearly insist on seeing through the climate plan. - Telegraph Journal

A new poll commissioned by the federal government states that many Canadians show support for developing renewable sources of energy and reducing emissions, while many still remain anxious about energy affordability. The poll, conducted in June 2017 and released last week, found that 34% of Canadians think reducing greenhouse gas emissions should be a “guiding principle” in developing natural resources and 25% believed “keeping energy affordable” should be the guiding principle. The report says that “the values people chose could be grouped into two silos – those relating to safety and environment (including climate change) and those related more to jobs and affordability.” However, an overwhelming majority of report respondents supported renewable energy over non-renewable energy, not making a connection between renewability, and affordability. - Toronto Star

A new project proposed by Labrador Interconnected to reconfigure existing transmission lines from Churchill Falls to the Happy Valley-Goose Bay terminal station and instead connect it to Muskrat Falls could bring a bump in costs to the Labrador customer. The project is estimated to cost $19,978,500 – about $1 per month more for domestic customers. However, the Public Utilities board has not approved the project, saying they are not convinced this is the lowest cost option for Labrador customers. - Western Star

After three years of gloom, the number 100 is finally starting to resurface in the forecasts of market analysts. A slump in new production outside the U.S. shale patch in 2019 could help to send Brent crude briefly back above US$100 a barrel next year, according to London-based consultancy Energy Aspects. The International Energy Agency also has a 100 number in its latest outlook, published Friday. While it doesn’t forecast prices and doesn’t yet look as far ahead as 2019, it sees global demand exceeding 100 million barrels a day for the first time in the fourth quarter of this year. - Edmonton Journal

Regulatory hearings for a natural gas pipeline that has divided the Canadian oilpatch opened amid tense exchanges Monday, as companies argue that the proposed pipeline will hurt rather than help the Western Canadian natural gas market. Lawyers packed a National Energy Board hearing room almost to capacity Monday as parties argued over the viability of TransCanada Corp.’s North Montney Mainline natural gas project, and the prospect of flooding the already over-saturated Alberta natural gas market with volumes from British Columbia. - Calgary Herald

The National Energy Board has denied an application from Maritimes and Northeast Pipeline for approval of a new pipeline service and toll, citing uncertainty of natural gas market. The regulator says Maritimes and Northeast had offered a load retention service and discounted rate to Irving Oil Ltd. in exchange for a 13-year commitment to use the pipeline to ship up to 68,579 gigajoules per day of natural gas from the Canada/U.S. border in St. Stephen, N.B., to the Irving Oil Refinery and cogeneration facility in Saint John. The NEB says Maritimes and Northeast offered the service to Irving Oil in response to a competing offer from the Emera Brunswick Pipeline. In its decision, the regulator says it turned down the application because it was premature, noting that the natural gas market in the Maritimes is facing a period of uncertainty around current and future natural gas supply and markets. - CTV News

The facts are in. And the evidence proves that provinces with female premiers have the fastest-growing economies. No wait, that’s not it. Bigger provinces grow faster. Or maybe it’s that provinces whose names end in vowels do better. It’s all random nonsense, of course. But that’s the level of economic analysis at play in a recent survey of provincial growth rates authored by Julia-Maria Becker and Maximilian Kniewasser, Pembina Institute directors of the Clean Economy Program and the B.C. Climate Policy Program, respectively. Our two putative economists claim, that since the four Canadian provinces that currently meet the federal government’s minimum carbon-price requirement of $10 per tonne — Alberta, British Columbia, Ontario and Quebec — are also the four provinces with the strongest economic growth rates over the past year, this evidence “soundly refutes the misconception that a carbon price hurts economic competitiveness and growth.” It proves nothing of the sort. - Financial Post

With the rise in population and prosperity in the developing world, the global demand for energy will increase. Global forecasting agencies all predict that this increasing demand for energy cannot be met by renewable energy alone. As the world’s fastest growing economies expand fossil fuel usage (including the United States under President Donald Trump), Prime Minister Justin Trudeau does the opposite, heaping on taxes and regulations to restrict non-renewable energy use. Thousands of jobs in the manufacturing sector are being lost in Canada as companies leave for the more welcoming U.S. As taxes and costs rise, promised green jobs fail to materialize, and few others in the world make these sacrifices, Canadians may soon start demanding a new approach that puts affordability on par with sustainability – and political accountability. - Toronto Sun

Natural gas to remain as primary energy source for electricity in U.S. — Xinhua

The U.S. Energy Information Administration (EIA) on Monday forecast that natural gas will remain as the primary source of U.S. electricity generation in at least the next two years. According to the January 2018 Short-Term Energy Outlook (STEO), released on Monday by the EIA, the share of total electricity supplied by natural gas-fired power plants is expected to average 33% in 2018 and 34% in 2019, up from 32% in 2017. The mix of energy sources used for generating electricity continues to shift in response to changes in fuel costs and the development of renewable energy technologies. - Global Times

The Trump administration announced new tariffs on imported washing machines and solar panels following findings by the U.S. International Trade Commission that both imported products "are a substantial cause of serious injury to domestic manufacturers," U.S. Trade Representative Robert Lighthizer said in a statement. The washer tariffs exceeded the harshest recommendations from ITC members, while the solar tariffs were lower than domestic producers had hoped for. The restrictions aim to help domestic manufacturers but drew complaints that consumer costs for new washers and solar installations will rise. A 30% tariff will be imposed on imported solar cells and modules in the first year, with the tariffs declining to 15% by the fourth year. The tariff allows 2.5 gigawatts of unassembled solar cells to be imported tariff-free in each year. - Public Radio International

Greenhouse gas emissions from the electricity sector would be reduced at twice the rate proposed by the Turnbull government under a radical new plan outlined by the Australian Energy Market Operator (AEMO). The "fast change" model puts the public operator on a collision course with policymakers after AEMO outlined a potential cut of 52% to all electricity emissions by 2030, double the rate required to meet our Paris climate change commitments. The paper comes as the government-created Energy Security Board – of which AEMO's renewables-focused chief executive Audrey Zibelman is a member – is preparing to release modelling next month for the government's National Energy Guarantee aimed at shoring up reliability while curbing carbon emissions. - Sydney Morning Herald

Iraq has signed a deal with a U.S. company to tap natural gas in one of its southern oil fields, a step toward exploiting a natural resource that has been neglected for decades. Iraq has long flared much of its natural gas, a byproduct of pumping crude oil, because of a lack of infrastructure. But the Memorandum of Understanding signed Monday would allow Orion Gas Processors to capture and process up to 150 million cubic feet per day of associated gas from the Nahr Bin Omar field. Oil Minister Jabar Ali al-Luaib described the agreement as an “important step” to “end the wasting of resources.” The field has a current daily output of more than 40,000 barrels of oil and 25 million cubic feet of gas. - National Post