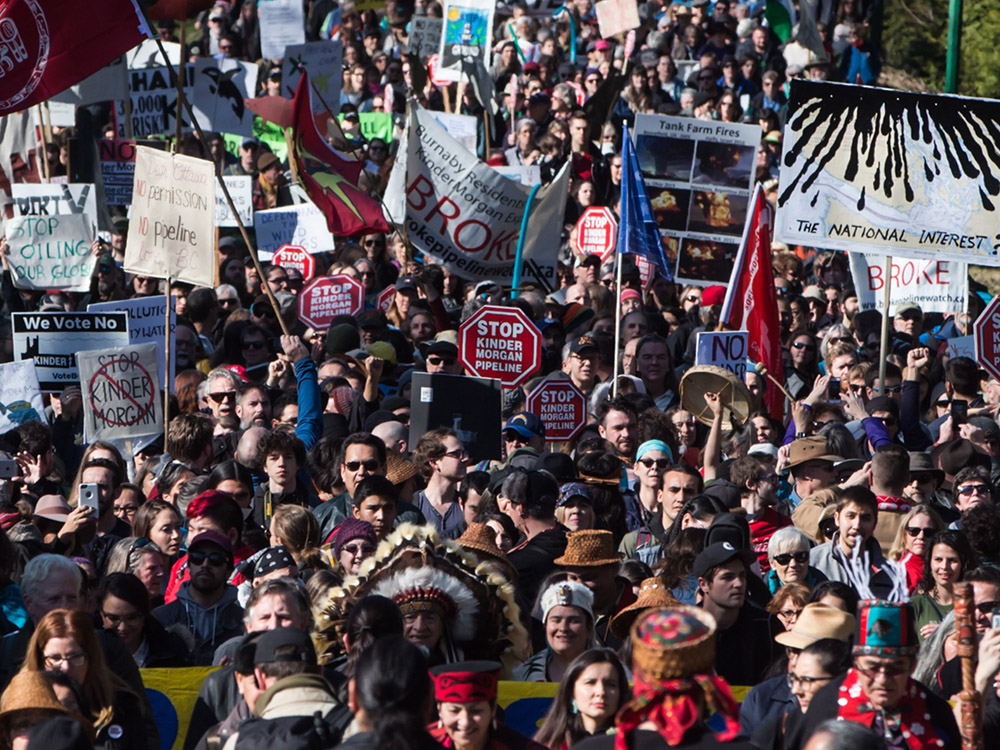 Is the pipeline debate starting to resolve in favour of pipelines being built and in favour of Canadians receiving full value for our energy exports? I believe it is, in part due to the realization as to just how much of the anti-pipeline campaign is foreign funded. People are beginning now to realise how significant this foreign influence is. After all, pipelines are turned down not because no one knows how to build them, and not even because they don’t get approved, but because of well-funded and highly-active political opposition. The activists have two main goals. They’d like to keep Canadian oil in the ground, and alternatively, they want to keep Canadian oil landlocked. Because we can’t reach overseas markets, our landlocked oil is sold at a huge discount to customers in the U.S. - Financial Post

On March 10 about 500 people from a dozen groups and First Nations gathered at Vancouver’s Jack Poole Plaza to send a message to the B.C. government that it’s time to get on with the critical Trans Mountain pipeline expansion project. Fifty-one First Nations have endorsed the expansion and the renewed prosperity for their people it’ll create — every First Nation along the route. More and more First Nations leaders have had enough and are starting to speak out against the forces of ‘no’ that have crushed so many opportunities. Yet opponents would have you believe that all First Nations in B.C. are opposed to the expansion — that’s just not true, and it’s disrespectful to pretend otherwise. - Vancouver Sun

The federal Liberals seemed to be on to a winner with the idea that they would win social license for a new pipeline on the West Coast by introducing a carbon pricing plan. But in recent days, there has been a great deal of noise about the plan unravelling, as the Alberta and B.C. governments slugged it out over the expansion of the Trans Mountain pipeline, and as the election of carbon tax opponent Doug Ford as the new leader of the Progressive Conservatives in Ontario raised questions about the participation of the largest province. But while the political consensus has evaporated, the legislative underpinnings remain firmly in place. The provinces ultimately will have no grounds for a legal challenge against the Liberal’s carbon pricing plan. The best and most realistic hope for those opposed to a carbon tax is for Andrew Scheer to win the next federal election in 2019. - National Post

The Pallister government says its new 5.3-cents per litre carbon tax will cause people to use less gasoline and reduce greenhouse gas emissions. But if that were true, why hasn’t it worked in B.C.? B.C.’s carbon tax translates into a 6.7-cent a litre tax on gasoline, as of 2012. But instead of causing people to alter their consumption behaviour and use less gas, sales there have skyrocketed. They’re not burning less gasoline in B.C., they’re burning more. So it’s a myth that if government adds a small tax to gasoline, like B.C,’s carbon tax, that it sends enough of a price signal to consumers to reduce their consumption. It doesn’t. And there is enough data out of B.C. now that proves it doesn’t work. - Winnipeg Sun

Andrew Scheer, the leader of the Conservative Party of Canada, spoke briefly at the Manitoba Chamber of Commerce Luncheon on Monday afternoon about how he’d repeal the federal government’s carbon tax plan and allow for provincial governments to make their own decisions when it comes to how they plan on reducing emissions. “We will have an environmental plan that speaks to lowering gas emissions, but it will not be done through taxation,” Scheer said. “It will be done through incentivization and making it easier for businesses and commuters to make the upgrades and the retrofits that will actually have an impact on reducing emissions.  - Winnipeg Sun

When most costs of living are rising, natural gas bills will not. Thanks to approval to keep rates steady from the British Columbia utilities Commission, Metro Vancouver residents won’t see any changes to their natural gas bills. In January the cost of natural gas hit one of the lowest levels in the past decade. The rates went down and residents in Lower Mainland saw an overall annual decrease of 6% or $45. FortisBC is regulated by the BCUC and all rate changes need to be approved by the commission. Every three months, Fortis BC and BCUC review the cost of gas rates to make sure they are fair and competitive. - Richmond News

Man-made climate change is a reality. The question is, does a carbon tax actually work to reduce emissions enough to reduce the rate of climate change? So far, the results are mixed at best. Norway has had a carbon tax since 1991. And yet their greenhouse gas emissions grew by 15%. In Europe, the cap and trade system ended up harming the environment with more greenhouse gasses released than before. It’s also worth noting that the reason some Liberal supporters, and apparently the government itself, want a carbon tax solely because they want more tax revenue to fund their bloated policies. There is also so much bureaucratic legislation, that innovative companies with technology that can fight climate change won’t start up in Ontario. - Huffington Post

Oilsands alliance aiming to cut down on reliance for steam, a major greenhouse emissions source — CP

Canada’s Oil Sands Innovation Alliance or COSIA, says it is entering its sixth year focused on finding new ways to reduce the sector’s need for steam, the generation of which leads to almost 80% of its greenhouse gas emissions. CEO Dan Wicklum says generating steam to separate heavy sticky bitumen from the northern Alberta sands in which its trapped is responsible for about 56 million tonnes per year of the total of 71 million tonnes of GHGs emitted from the oilsands. Wicklum says COSIA members hope to cut GHG intensity by 10% to 30% over the next five years, while also sharing technologies to lessen the industry’s impacts on land and water and deal with tailings ponds. - The Toronto Star

Coal-fired power plants in Pennsylvania cut smog-forming emissions by more than half last year, in a rare regulatory effort that has won support from both industry officials and environmentalists. Emissions of nitrogen oxides, or NOx, at the state’s six power plants that burn newly mined coal exclusively fell 60% last year from the year earlier to 23,133 tons. At the 50-year-old Keystone Generating Station in the rural southwestern part of the state, emissions of nitrogen oxides fell 54% to 6,095 tons last year from the prior year, even though the plant burned more coal in 2017. - Wall Street Journal

Two large lithium-ion batteries will be built and connected to the grid in regional Victoria this year, giving the state’s west a significant renewable energy boost in time for next summer. The batteries, which will store solar and wind-generated energy, will be built near Ballarat and Kerang and will have a combined generation capacity of 55 MW and a combined energy storage of 80 megawatt-hours – giving them more than half the power of South Australia's gigantic 100MW Tesla battery. Instead, it will team up with the Turnbull government's Australian Renewable Energy Agency and contribute $25 million of its own to the $50 million project. Federal Energy Minister Josh Frydenberg said the batteries would push down energy prices and improve reliability in Victoria. – The Age