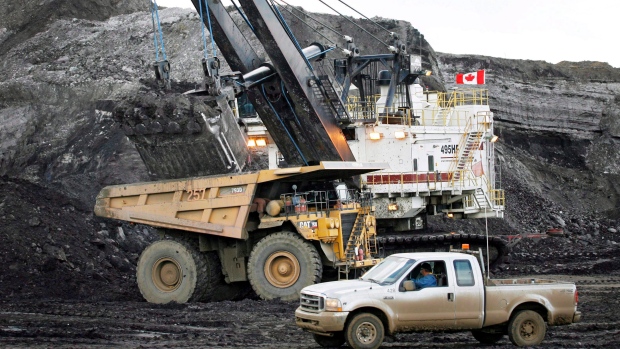 A decision to build a massive new oilsands mine north of Fort McMurray has been delayed. And that has Alberta's Opposition party worried the proponent might back out altogether. The proposed $20.6-billion Frontier oilsands mine, if approved, would stretch over 292 square kilometres of boreal forest. That's an area roughly the size of Mississauga, Ontario. The proponent, Teck Resources Ltd., said the mine would employ 7,000 people during peak construction and 2,500 people during its operation. - CBC

TransCanada Corp. gave its strongest signal yet that it has enough demand from producers to fill the long-delayed Keystone XL pipeline with oil. Now the ball is in Nebraska’s court. While the company has long said it expected sufficient support from oil producers, TransCanada completed an open season for them to bid for space on the line last month, giving it hard data on demand. With the question of producer support mostly settled, the focus turns to a decision from regulators in Nebraska later this month on whether the pipeline can proceed.  - Bloomberg

The Supreme Court of Canada will hear an appeal from Alberta's energy regulator that seeks to overturn a ruling that could allow bankrupt energy companies to walk away from cleaning up abandoned oil wells. The decision could affect industrial sites across the country. The question is whether a cleanup order from a provincial body is a legal obligation or a financial liability, says Nigel Bankes, dean of natural resources law at the University of Calgary. "When a provincial regulator issues someone a cleanup order, under what circumstances is that just re-emphasizing an existing obligation or is it actually amounting to a provable claim in bankruptcy?" he said Thursday. In May 2016, an Alberta Queen's Bench judge ruled in favour of the bankruptcy trustee for Redwater Energy Corp. The decision said proceeds from the sale of assets from bankrupt energy companies should go first to creditors and not toward the cost of cleaning up the mess from a company's operations. - Globe & Mail

The cost of looking after hundreds of wells, pipelines and other oilfield gear left behind by bankrupt Lexin Resources Ltd. has exceeded $2-million and the bills continue to roll in, says Alberta's Orphan Well Association. The association was handed responsibility for nearly 1,100 wells plus associated equipment after the Alberta Energy Regulator took the unusual step last February of shutting down all Lexin operations. The AER accused the Calgary-based oil and gas producer of ignoring orders and regulations and forced it into receivership, claiming it owed more than $1-million in levies to the OWA and another $70-million in security for its reclamation obligations. At the time, OWA chairman Brad Herald estimated it would cost about $1-million to administer the assets for six months until the ones with value are sold to new owners — but he said the actual costs have more than doubled as the process enters its ninth month. - National News Watch


Ontario on track for next generation of clean trains? — Ben Spurr

The province is considering investing in cutting edge hydrogen-powered trains for the GO Transit network, touting the benefits of what it says could be the next generation of clean trains. Rail vehicles powered by hydrogen fuel cells would be emissions-free, quiet, and potentially superior to traditional electric trains. Provincial officials say it’s their responsibility to ensure Ontario doesn’t miss out on a potentially groundbreaking technology. But hydrogen trains have never been put into service on commuter rail networks of the size GO operates, and it will likely be years before the technology is ready. That uncertainty, combined with Metrolinx touting a chance to make Ontario “a global leader in hydrogen technology,” has critics asking whether the transit agency is pursuing the idea for the right reasons, particularly because it is already midway through plans to green the GO network using conventional electric trains. - Toronto Star


Pursuit of U.S. utility cuts into Hydro One profit — CP

Hydro One says its third-quarter profit was down 6% from last year as a result of costs associated with the proposed $6.7-billion acquisition of Avista Corp., a U.S. utility company based in Spokane, Wash. Ontario’s largest electricity distributor says its profit attributable to common shareholders was $219-million in the three months ended Sept. 30, down from $233-million last year. Excluding the costs associated with Avista, Hydro One’s adjusted profit was up 2% at $237 million. Hydro One’s earnings per share were down two cents at 37 cents, while adjusted earnings were up one cent at 40 cents per share. - Toronto Sun

The transformation to a low-carbon economy has begun. Much of the public debate has been about the policy framework and instruments for shaping a low-carbon economy. Some of the basic economic fundamentals, such as the role of consumption and investment, and the impact on growth and wealth, have been largely skipped over. Let's consider more deeply the interlinked roles of public policy and decisions by individual consumers and businesses. The most obvious policy options for reducing greenhouse gas emissions are carbon pricing and complementary regulations. Even if the United States is backing off climate-change commitments, Europe and China are not, so doing nothing or reversing course is unlikely to be wise policy for Canada. Research by a number of analysts, including Canada's Ecofiscal Commission, has indicated that carbon pricing is more effective than alternative rigid regulations in terms of reducing greenhouse gas emissions while minimizing the impact on GDP and the underlying economy. - Globe & Mail


Why are gas prices in Canada suddenly so damned high? — Tristan Hopper

All of a sudden, Canadian gas prices are reaching heights not seen since the release of Sharknado. Even in a cheap fuel haven like Alberta, prices are peaking as high as $1.26 per litre in Edmonton and $1.28 in Calgary. In B.C., the average price is an incredible $1.38 per litre, breaking $1.40 in Vancouver. So, the National Post called up Dan McTeague with GasBuddy.com and a semi-obsessive expert on all things petroleum. Below, the surprisingly complex backstory to why your Honda just got way more expensive to run. He listed a few reasons for the peak in prices. For one thing America is producing less and consuming more, and therefore, has less gas to send our way. Another reason is that the Canadian dollar cannot afford gas. - Ottawa Citizen

Natural Resources Minister Siobhan Coady says there have been bilateral talks with the Quebec government about mining in the Labrador Trough, but not yet serious talks about any new energy transmission lines, or change in the movement of power through the provinces. On Wednesday, the French-language outlet La Presse reported federal Natural Resources Minister Jim Carr is supportive of new power lines between Quebec and the Atlantic provinces. It said Carr also welcomed the improving relationship between the Government of Quebec and the Government of Newfoundland and Labrador. - Telegram

During President Donald Trump’s visit to Asia this week, a Chinese energy company pledged to spend almost $84 billion helping West Virginia build an entire supply chain that would bring the benefits of America’s shale gas boom to bear. Much of it will probably never materialize. China Energy Investment was formed from the combination of Shenhua Group Corp., the nation’s largest coal miner, and China Guodian Corp., one of its top-five power generators, making the combined power company the world’s biggest. As Bloomberg Intelligence energy analyst Michael Kay points out, not even U.S. energy pipeline giant Kinder Morgan Inc. budgets that much for growth projects. There just isn’t enough infrastructure with high enough returns to make it worthwhile. “That’s not going to happen,” Kay says. “The problem isn’t necessarily anything other than financial.” - Bloomberg

The prospects for extending the life of ConocoPhillips' Darwin LNG plant for a further two decades have dramatically brightened after successful drilling and cost reduction efforts at the Barossa gas field in the Timor Sea. The US major and partner Santos have this week both talked up the multi-billion dollar project to develop the offshore field, which would help keep the 3.7-million tonnes a year Darwin plant at full production after gas flows from the Bayu-Undan gas field wind down early next decade. - Australian Financial Review