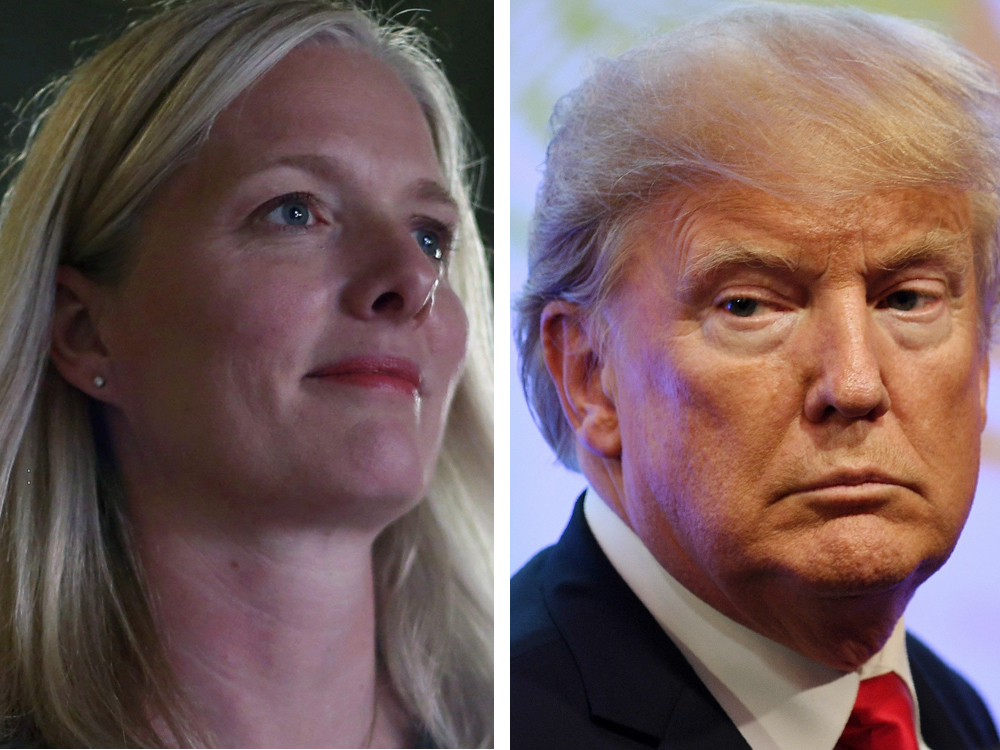 Environment Minister Catherine McKenna is touting Canadian leadership before she heads to Germany for the latest round of talks on the Paris climate change agreement, where she is expected to urge other countries to phase out their reliance on coal-fired energy. McKenna told the Star she and her British counterpart will launch a joint campaign Thursday calling for other countries to declare a plan not to build any more coal-fired plants and eliminate existing ones. This will include more countries and businesses signing on to the alliance, which among other things will aim to help developing countries move from coal to cleaner energy sources like wind and solar, McKenna said in an interview. “We know that coal is not the energy source of the future. People can see there are very tangible things we are doing, and I think it’s also important to show Canada’s leadership.” - Toronto Star

Climate change talks in Germany are headed for a collision course on coal this week — and Canada is right in the middle of it. Environment Minister Catherine McKenna arrived this weekend in Bonn, Germany, to attend the second week of COP23, the annual United Nations climate change talks that two years ago led to the Paris climate change accord. This year, the parties to Paris are hammering out rules for how that accord will be implemented, how carbon [dioxide emissions] will be counted and how countries will be held accountable for their emissions cuts. McKenna and her British counterpart, Claire Perry, minister of state for climate change and industry, want the conversation to focus on getting rid of coal as a power source, which is responsible for more than 40 per cent of global carbon dioxide emissions. McKenna and Perry are hosting a joint event November 16 to launch a joint campaign calling for other countries to declare a plan not to build any more unabated coal-fired plants and eliminate existing ones. Unabated plants are those that have no carbon capture or storage technology to keep emissions from ending up in the atmosphere. - National Post

Alberta is putting aside $40-million to help workers losing their jobs as the province transitions away from thermal coal mines and coal-fired power plants over the next decade. Labour Minister Christina Gray said the money will top up benefits to 75% of a worker's previous earnings during the time they collect employment insurance. She said Alberta is also asking the federal government to not claw back existing benefits as the province tops up those EI payments, while also extending EI benefits for retiring coal workers. "Our government is going to provide workers with income support," Gray said Friday. "We need the federal government to implement policy flexibility so that our support can be more effective." The province estimates there are 2,000 workers affected, with layoffs starting in the new year. Gray said even if the federal government does not step up, the province will provide the funds to match that 75% threshold. "This income would insure that workers are better able to support their families as they transition to new employment training opportunities or retirement," said Gray. The money will come from Alberta's carbon tax. - Globe & Mail

A trick politicians use to intimidate us on the subject of human-influenced climate change is to leap from the fact that because scientists say it is real, we must support whatever they propose to address it. This is absurd. How to address human-influenced climate change involves economic policies that are political decisions, not scientific ones. And the fact is that much of what our politicians are implementing, Prime Minister Justin Trudeau’s national carbon pricing plan being a case in point, is nonsense. - Toronto Sun

Saskatoon motorists who set out to fill their gas tanks on Thursday got a shocking surprise when they pulled up to the pumps. Prices had shot up to 116.9 cents per litre at most gas stations — an eight-cent jump from the previous day. Although the city is experiencing its highest gas price since June 2016, GasBuddy’s senior petroleum analyst Dan McTeague said Saskatoon prices are “significantly low” compared to other Canadian cities — especially those already paying a carbon tax. During the past two weeks, Chicago’s spot market — which sets the benchmark price for all wholesale gas in Western Canada — saw prices increase by 60 cents per gallon, thanks in part to both the ruptured Explorer pipeline in the Gulf of Mexico, the closing of two large Midwestern refineries for regular maintenance and record-breaking demand from American motorists, McTeague said. Gas retailers would have known about the price jump on Monday evening, although some decided to continue drawing from their remaining inventory at a lower price for as long as possible before pushing it up to its new higher price, he said, adding the only reason prices aren’t already higher is because retailers are absorbing a portion of the additional cost. - Saskatoon Star Phoenix

Prior to last spring’s provincial election, the B.C. NDP promised to appoint a panel to examine the impacts of hydraulic fracturing, or fracking, in B.C., a review that would include an investigation into the natural gas industry’s impacts on water, earthquakes and greenhouse gas emissions. As an organization concerned about human health and welfare, we believe that such an inquiry, however well intentioned, would be much too limited in scope and should be expanded to a full public inquiry to capture the wide range of concerns British Columbians have. It must also examine the cumulative effects of fracking on human and environmental health. The evidence is mounting: when fossil fuel companies pump massive amounts of water under incredible pressures deep into the earth to liberate trapped methane gas in the fracking process, problems arise. A growing number of jurisdictions and countries, most recently Ireland and Scotland, have banned or placed moratoriums on fracking based on evidence of fracking’s cumulative harms to people and ecosystems. While a growing majority of B.C. residents opposed fracking in a 2016 poll, barely half knew that fracking takes place in the province. - Vancouver Sun

Alberta needs to start shifting quickly out of the oilsands to avoid serious economic trouble as the world moves away from fossil fuels, a University of Waterloo professor says. Financial, legal and environmental pressures will push countries to deal with climate change by turning away from fossil fuels in coming decades, and that will hit oil-rich Alberta hard, said Thomas Homer-Dixon, an expert on links between society, technology and nature. He urged the province to focus on developing expertise in the renewable energy field, such as ultra-deep geothermal drilling 10 km underground to find hot water for power generation, instead of focusing on oil for which demand will eventually fade. “We need to shift our market from exporting stuff to exporting ideas and engineering expertise,” Homer-Dixon, a professor at the Balsillie School of International Affairs, said Tuesday at Edmonton’s Spark clean technology conference. - Calgary Herald

Hydro One Ltd. says its third-quarter profit was down six per cent from last year as a result of costs associated with the proposed $6.7-billion acquisition of Avista Corp., a U.S. utility company based in Spokane, Washington. Ontario’s largest electricity distributor says its profit attributable to common shareholders was $219-million in the three months ended Sept. 30, down from $233-million last year. Excluding the costs associated with Avista, Hydro One’s adjusted profit was up two per cent at $237-million. Hydro One’s earnings per share were down two cents at 37 cents, while adjusted earnings were up one cent at 40 cents per share. Gross revenue was $1.52-billion, down 10.8 per cent in the third quarter of 2016. Excluding power purchases, net revenue was up 1.3% at $847-million. Hydro One says its revenue was positively affected by higher transmission rates, but negatively affected by lower peak demand and lower energy consumption during mild weather during the summer. - Toronto Star

Canadian Natural Resources Ltd. is considering adding a 30,000- to 40,000-barrel-per-day bitumen-only project to its Horizon oilsands mine to take advantage of excess ore production and pipeline capacity. The proposed project could be approved by the company as early as 2019 and would continue a trend in the sector to bolt on brownfield production to avoid the high costs and risks of building new mines from scratch. “Canadian Natural has a near-term opportunity to exceed upgrading capacity at Horizon,” said spokeswoman Julie Woo. “We are moving into our in-house engineering design specification stage. We are targeting 2018 for engineering design completion.” The Calgary-based company has just completed its Phase 3 expansion to boost production at Horizon to 250,000 barrels per day of upgraded synthetic crude, a medium grade oil that sells for about the same price as New York benchmark West Texas Intermediate. - Edmonton Journal

More than half of Puerto Rico’s power grid remains offline, seven weeks after Hurricane Maria caused massive damage to the U.S. territory. This is the largest blackout in U.S. history, and efforts to restore electricity provision to the Puerto Rican population were not helped by a major power line failure last Thursday, which reduced capacity to 18%. According to the latest official figures, capacity is now back up to almost 48%, after the Puerto Rico Electric Power Authority (PREPA) fixed it. The line had previously been repaired by Whitefish Energy. Whitefish, a Montana company with two employees, won a $300 million contract with Puerto Rico to fix its grid after Maria’s devastation.  The deal was scrapped at the end of last month due to controversy over its staffing levels and a lack of transparency around its labor costs and profits. - Fortune

Regulatory risks around AGL Energy have intensified after Energy Security Board chairman Kerry Schott highlighted concerns the utility would have too much market power in South Australia under the proposed National Energy Guarantee (NEG) system. Ms. Schott said effective competition was a prerequisite for the NEG to work. She said that while there was enough competition in most states, a "careful" approach would be needed in South Australia because the electricity supply sector there was dominated by one company: AGL. The market power of all three major electricity suppliers — AGL, Origin Energy and EnergyAustralia — is an issue of which the ESB is "well aware," Ms. Schott said on a stakeholder webinar on Friday, adding it would be discussed at the Council of Australian Governments meeting to consider the NEG. - Australian Financial Review