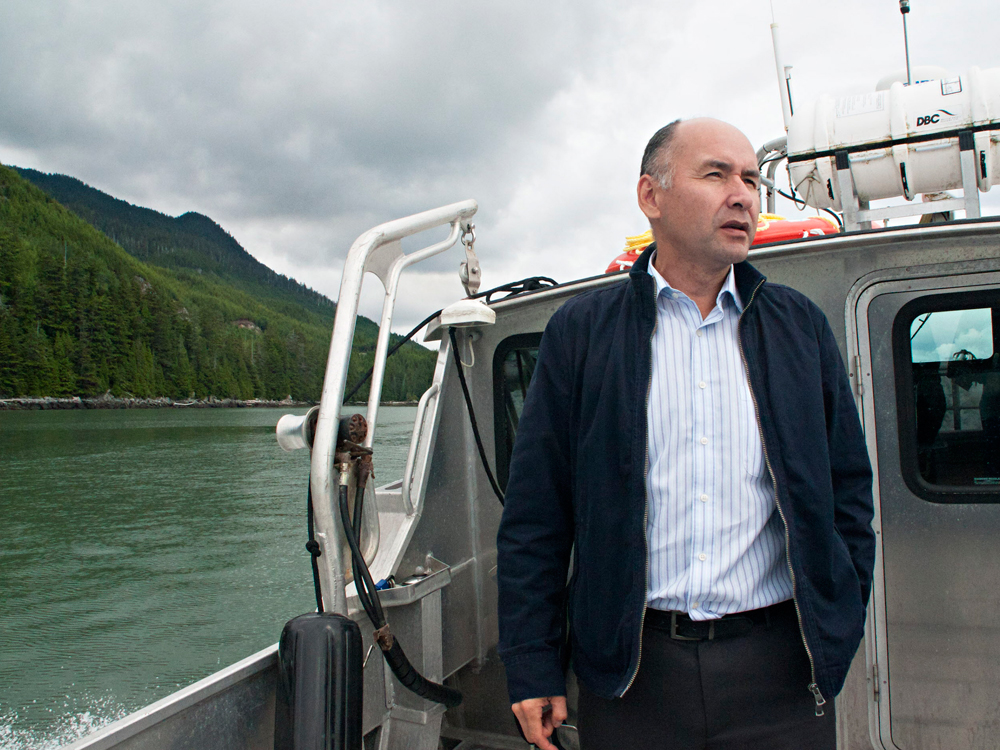 While opponents steal the limelight, scores of pro-development First Nations groups worry they'll lose once-in-a-lifetime opportunities that could lift people out of poverty. Ellis Ross is filled with gut-wrenching dread as several major proposed energy projects unravel in British Columbia. The former chief counsellor of the Haisla Nation near Kitimat has laboured for more than 13 years to improve Indigenous lives through economic self-sufficiency — it’s how he says he measures success — and now it could all come crashing down because of what he believes are misguided government actions that burden those projects with unnecessary costs. - Financial Post

Even the spread of alternative-fuel vehicles and increased energy efficiency won’t quickly stop the growing international demand for oil, a speaker at an Edmonton energy symposium said Wednesday. About five million electric and hybrid vehicles are expected to be sold this year, rising to 30 million cars, trucks and other vehicles in 2030, or approximately five per cent of the world’s fleet, said Julie Afanasiff, senior vice-president of Sequeira Partners Inc. - Edmonton Journal

About 5,000 barrels of oil gushed out of the Keystone pipeline on Thursday in South Dakota, blackening a grassy field in the remote northeast part of the state and sending cleanup crews and emergency workers scrambling to the site. “This is not a little spill from any perspective,” said Kim McIntosh, an environmental scientist with the South Dakota Department of Environment and Natural Resources. No livestock or drinking water sources appeared to be threatened, McIntosh said, and no farm buildings or houses are within a kilometre. The spill, near Amherst, S.D., came just days before regulators in neighbouring Nebraska decide whether to grant the final permit needed to begin construction on a different pipeline proposal — the Keystone XL — which would be operated by the same company. An announcement in Nebraska is expected Monday. - Toronto Star

Canada and the United Kingdom have enticed 18 other nations to adopt their mutual goal of weaning themselves off coal-fired power — but at least two provinces are trying to negotiate their way out of the federal government’s own domestic plan. Only four provinces still need coal to make electricity, but Alberta is currently the only one with a plan to phase it out by Ottawa’s 2030 deadline. Saskatchewan and Nova Scotia are both trying to convince the Liberal government to let them use coal beyond the year 2040. Environment Minister Catherine McKenna was all smiles Thursday as she and her British counterpart officially launched the Global Alliance to Power Past Coal at the United Nations climate change talks in Germany. - Toronto Star


Canada and 19 other countries agree to phase out coal, but most of them don't use it anyway — Geoffrey Manning

Canada’s Environment and Climate Change Minister Catherine McKenna and U.K. Minister of State for Climate Change and Industry Claire Perry announced the formation Thursday of a group of countries that had agreed to phase out coal over the next dozen years. The group will also try to expand its membership to 50 by next fall’s United Nations Climate Change Conference in Poland. Similarly, Perry said the U.K. is committed to phasing out “unabated coal-fire power generation no later than 2025 and we hope to inspire others to follow suit.” Canadian and U.K.-based groups supporting the phase-out of coal expressed their hope that countries like South Korea, Japan and Germany, which burn substantially more coal than any in the group of 20, would join. All told, coal consumption from the group of 20 comprises just over 2% of total coal consumed around the world. None of the world’s largest coal-burning countries – led by China, India, the U.S., Japan and Russia – are members of the coalition announced Thursday. - National Post


Hydro One seeks rate hike of nearly 5% next year — CP

Hydro One has applied for a rate increase in order to keep the power system stable, its president and CEO said Thursday. Speaking after delivering remarks to the Empire Club, Mayo Schmidt spoke about the application that’s currently before the Ontario Energy Board, which seeks to increase rates by 0.5% this year and 4.8% next year. Hydro One has kept its distribution rates flat, what it is seeking is an increase to transmission rates, he said. “What we apply for is to keep the system stable and functioning,” Schmidt said. Ontario’s Liberal government cut hydro bills by an average of 25% this year, after soaring costs for ratepayers helped send Premier Kathleen Wynne’s approval ratings to record lows. Schmidt took some credit for the hydro plan in his speech Thursday, telling the audience that when he started at Hydro One two years ago one of the company’s first initiatives was to advocate for rate relief. Hydro One customers have seen an average 31% decrease in bills, he said. - Toronto Sun

The Yukon is sitting on a goldmine of sustainable energy, a new geological study says. A Geological Survey of Canada report stated that there is enough heat trapped in rocks deep below the surface to generate enough electricity to light up a whole country. Stephen Grasby, co-writer of the report and a scientist with the Geological Survey said that geothermal electrical generating stations are used in many countries around the world and that many areas of Canada have the potential to produce such power. "The highest potential for producing electrical power is certainly in the West and the North, British Columbia, Northern Alberta, the Yukon and Northwest Territories," Grasby said. - CBC News

The University of Victoria will be receiving $1.4-million in federal funding to establish an institute for developing marine renewable energy technologies. The funding was announced by Parliamentary secretary Jonathan Wilkinson at the University of Victoria on Thursday. The university said the $1.4-million from Western Economic Diversification Canada will go toward setting up the Pacific Regional Institute for Marine Energy Discovery. The institute will be led by mechanical engineer Brad Buckham. It will help develop and commercialize wind, wave and tidal energy technologies. It will also support the adoption of alternative technologies in remote coastal communities, including Indigenous communities, who rely on diesel fuel generators for electricity.  - Chek News

The U.S. Department of Energy (DOE) has granted Presidential Permit for the $1.6-billion Northern Pass hydroelectric transmission project. The project is being developed by Northern Pass Transmission, a limited liability company formed by Eversource Energy. Intended to deliver up to 1090MW of low-emission, reliable hydropower from Quebec to Deerfield, New Hampshire, the 192-mile transmission system is expected to reduce energy costs and also carbon footprint in the region. Expected to create 2,600 jobs in America during construction phase, the project is now subject to approval by the State of New Hampshire’s Site Evaluation Committee. The project is also expected to result in over $600-million in annual energy cost savings for New England consumers. - Energy Business Review

Chief Scientist Alan Finkel said that if his "orderly transition" blueprint and Clean Energy Target had been rapidly adopted and not dismissed by the Turnbull government the electricity grid would already be on its way to better health. Dr. Finkel said the National Energy Guarantee (NEG) that the Energy Security Board had proposed as a more politically palatable alternative to the Clean Energy Target had a less ambitious CO2 emissions reduction target than the "modest trajectory" modelled by the Finkel review of energy and was more complex. Still, Dr. Finkel said he believes that the NEG is workable and if there is sufficiently intensive consultation with the industry "then it will deliver the strategy that we need, and it will be able to meet any future changes in the target." - Australian Financial Review

A recent warning to humanity endorsed by thousands of scientists around the world includes "scaremongering" and "overheated" claims while ignoring much of the progress made in recent decades, some experts say. "It concerns me that the message from science is this doom-and-gloom scenario that just turns off about 75 per cent of people," said Erle Ellis, an associate professor of geography and environmental systems at the University of Maryland, Baltimore County. "There's a small percentage that loves the crisis narrative, and they just repeat it over and over to each other." Ellis said he's "somewhat embarrassed" for his scientific colleagues who have rallied behind this warning, arguing that it mostly talks about negative trends and ignores the increasing wealth, health and well-being of human populations globally. CBC

On a dreary November morning, a small party of visitors from around the world boards a boat for an hour-long ride around what was once one of the most polluted waters in Germany’s Ruhr valley. The boat is the first in the world to be fitted with an electric engine powered by a fuel cell containing methanol — a form of alcohol that inevitably prompts “booze cruise” jokes among passengers. What makes the boat really stand out, though, is the fact that the methanol is produced using a chemical process which draws carbon dioxide out of the air. The technology, though still relatively new, is being touted by some as a weapon in the fight against man-made climate change. The boat is one of three prototypes designed to show that carbon dioxide emissions converted to methanol can serve as an eco-friendly fuel of the future. The others are a car than can run for 500 kilometres (310 miles) on methanol and a house capable of producing and storing all the electricity it needs to be self-sufficient. - National Post