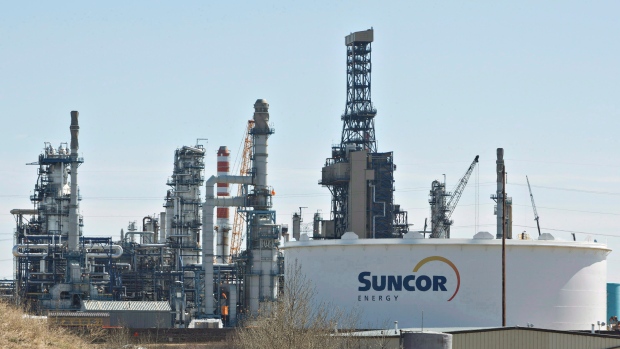 A shift in global oil markets sentiment is under way, replacing decades of scarcity fears with confidence in surpluses, capping oil prices and forcing changes in the way the industry works, observers say. "We're moving from a mindset where oil was considered a scarce resource to one now where it's more of a plentiful resource," said Steve Reynish, executive vice-president of strategy and corporate development at Suncor Energy Inc., speaking at a conference in Calgary last week. "What we're seeing is a huge reorganization worldwide and it's all about how can we compete in a more plentiful world and that really takes us to competitiveness, cost-cutting, capital discipline." Reynish said Canada has fallen behind the U.S. in pipeline and major resource project construction and needs to rework regulatory, political and environmental priorities. - CBC News

Alberta Premier Rachel Notley says the federal government is being unfair in the way it assesses pipeline projects. But Notley’s government won’t pursue a legal challenge for now to determine whether the National Energy Board overstepped its mandate in the case of the Energy East pipeline. Notley says instead she will focus on working with Prime Minister Justin Trudeau’s government to advance two other pipeline projects that already have the green light: the Trans Mountain expansion to the West Coast and Enbridge’s Line 3 to the U.S. Midwest. - Global News

Ottawa’s decision to approve the Trans Mountain pipeline was made on a broad base of evidence, a lawyer for Alberta’s attorney general has told the Federal Court of Appeal. Doreen Mueller said the governor in council considered economic, environmental, cultural and Indigenous interests in giving the $7.4-billion project its go-ahead last November. Mueller was allotted 30 minutes to address a panel of three judges Friday but spoke for less than two minutes, saying Alberta’s position was stated in written submissions already forwarded to the court. The ultimate decision on approval of the project lies with the governor in council, the court document says. “It is not this court’s function to reassess and reweigh the evidence to reach its own public interest determination in respect of the project. Under the applicable statutory scheme, only the governor in council determines whether the project is in the public interest.” Alberta is an intervener in judicial reviews launched by several B.C. First Nations, two environmental groups and the cities of Vancouver and Burnaby. - Vancouver Sun

Environment Minister Shannon Phillips says Alberta is taking precautions to ensure minimal impact on bird and bat populations as it expands the use of wind power in the province, but she says allegations that wind energy is a major killer of winged wildlife have been vastly overblown in the past. Conservationists aren't so sure however, and believe the province must do more to mitigate an increasing threat to birds and bats — especially the winged mammals — from new turbines in the province coming over the next decade. Alberta currently has about 900 operating wind turbines, with the third-largest generating capacity among provinces, according to the Canadian Wind Energy Association. The NDP government wants to significantly boost wind energy, with a plan to have 30 per cent of Alberta's power supply coming from renewables such as wind, solar and hydro by 2030. - Calgary Sun

A divided panel of federal regulators granted approval Friday for the Atlantic Coast Pipeline, which would begin in West Virginia and end in Pembroke. The Federal Energy Regulatory Commission also gave approval to the Mountain Valley natural gas pipeline, another major East Coast project. The approvals had been widely expected by both supporters and opponents of the pipelines. “Everyone assumed that FERC would approve the federal permit for the ACP because it has only denied two pipeline permits over its 40-year history,” said Mac Legerton, executive director of the Center for Community Action who has been outspoken in opposing the project. “Everyone expected this decision despite the significant criticisms of the draft permit in relation to both environmental and environmental justice issue.” - The Robesonian

After years of hope and promise, renewables are beginning to establish a presence in the energy market free of the requirement for heavy subsidies or other policy interventions. The International Energy Agency’s latest review of the renewables sector records the remarkable progress that is being made, particularly in terms of falling costs. Renewables cannot yet transform the entire energy business but in electricity they are becoming deeply disruptive to the established competitive order. Five years ago, the IEA produced a report suggesting we were entering the golden age of gas — encouraging some to invest in a range of very big projects, many relying on the expensive process of liquefaction. The projections of gas consumption made then were significantly overoptimistic. Is this projection of renewables growth more credible, and if so what does it mean for the global energy mix, for competing sources of supply such as gas, coal and nuclear and for climate change? - Financial Times