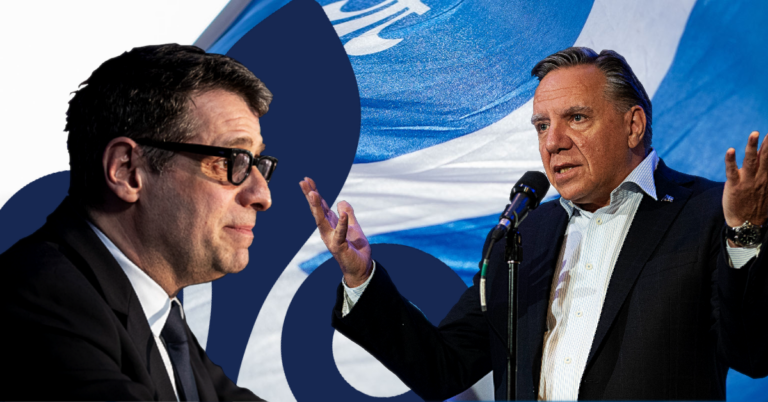 According to media reports, Quebec Premier Francois Legault has been quietly plotting with Justin Trudeau about the possibility of reviving the Énergie Saguenay project.

That’s right – our “green” PM is rumoured to be in talks with the Quebec premier about a natural gas pipeline through that province.

A new pipeline? In Quebec?

This would be a spectacular “flip-flop” for both of these Quebec politicians.  What is going on?

Early into the Quebec provincial election campaign, a real issue emerged around how liquefied natural gas (LNG) produced in Quebec could build the province and help Europe.

Premier François Legault’s Coalition Avenir Québec (CAQ) hopes to win a second term in government on October 3rd. The CAQ is often portrayed as a centre-right or “conservative” party, but already this reputation is under attack from the surging Conservative Party of Quebec led by Éric Duhaime.

Duhaime is challenging Legault’s “conservative” credentials.  One of the Conservative leader’s most pointed attacks so far has been on Legault’s 2021 decision to cancel the “GNL Énergie Saguenay” project: a pro-growth, job-creating proposal for a pipeline from west of Quebec which would transport natural gas to a terminal in the province’s Saguenay region.

There, the gas would be cooled to its liquid state to become LNG and then to be shipped to places like Europe – where the French, the Germans and many others are crying out for Canada to help them deal with the energy crisis.

Legault’s 2021 decision to cancel Énergie Saguenay was a response to the usual “green” opposition to fossil fuels. Doubtless, Legault was seduced by the empty promises of the same sort of green “advisers” constantly pressuring other politicians across the country to “go green.”

Duhaime’s challenge to Legault comes in the wake of German Chancellor Olaf Scholz’s visit to Canada last month. That trip was originally billed as an opportunity for Scholz to solicit Canadian LNG for Europe and presumably for projects such as GNL Énergie Saguenay.

But Prime Minister Trudeau poured cold water on that export idea when, during a press conference with Scholz, he said there has “never been a strong business case” for exporting LNG from Quebec and Eastern Canada to Europe.

For his part, Quebec Conservative leader Eric Duhaime has been quick to exploit the situation. He announced weeks ago that, if elected on October 3rd, his party will reverse Legault’s “green” policy by overturning the ban on LNG and permitting the projected $14 billion of investment to flow.

This means Duhaime would allow for a pipeline into Quebec, enabling LNG to be produced in the Saguenay and then exported to overseas customers.

Éric Duhaime has a long reputation of support for free-market policies and I have no doubt that his support for the GNL Énergie Saguenay project is sincere and based on political conviction. But it is easy to see why Duhaime has chosen to promote a reversal of Legault’s signature “green” policy. Almost all of Duhaime’s potential Conservative voters, and most of Legault’s and the CAQ’s, support the LNG proposal for the Saguenay. At least, this is according to Léger, one of Quebec’s leading pollsters.

According to a survey conducted by Léger at time of the GNL cancellation in 2021, only 34% of Quebecers favoured the project, and 46% were opposed. Doubtless such polls informed Legault’s decision.

But by May 2022, months into the Russia-Ukraine war, those numbers had reversed, with Léger quietly reporting that 44% of Quebec voters were by then in favour of the project, and for reversing Legault’s ban, with only 35% still supportive of Legault’s decision to cancel.

The recent Léger poll also broke down the numbers for and against the reversal of Legault’s anti-business, anti-LNG, “green” ban on the GNL Énergie Saguenay project. Those still against the development of LNG in Quebec (as of May) are largely very left wing, separatist and green: 57% of those supporting the separatist Parti Quebecois (PQ) party still support the ban, and 64% of backers of the overtly socialist Quebec Solidaire party also support the ban.

It is a different story for those supporting the once-upon-a-time “pro-business” Quebec Liberal Party (PLQ): 51% of Quebec Liberals are for the reversal of Legault’s ban on the LNG development, with only 31% still in favour of the ban.

Among the supporters of Éric Duhaime’s surging Quebec Conservatives  (PCQ), an impressive 76% support the overturning of Legault’s ban on the GNL Énergie Saguenay project, and only 17% were opposed.

As for those supporting Legault’s CAQ, more of his own voters support a reversal on his ban (46%) than in continuing it (35%).

Once you exclude the minority viewpoint of the far left, socialist, separatist and green fringe of Quebec opinion, a large majority of Quebecers, according to Leger, have come around to the view that bringing natural gas from out of province into Quebec, processing it into LNG in Quebec, and exporting it to a very eager European market, is a win for all concerned.

Trudeau might not care about Legault and the CAQ’s political future, but Legault certainly does.  For months now, Duhaime’s Quebec Conservatives have been growing in popularity, eating into the CAQ’s support on the centre-right of the spectrum. Legault is almost guaranteed re-election, but the emergence of a free-market party on his right flank must be making him nervous.

The Quebec Conservative leader should be applauded for this policy, which is the right approach for Quebec and for the world.  It means more affordable energy – which everyone needs.

But it is also good politics.

Will Legault flip-flop on his ban on GNL Énergie Saguenay as a result of pressure from Duhaime and the Quebec Conservatives? Stay tuned!